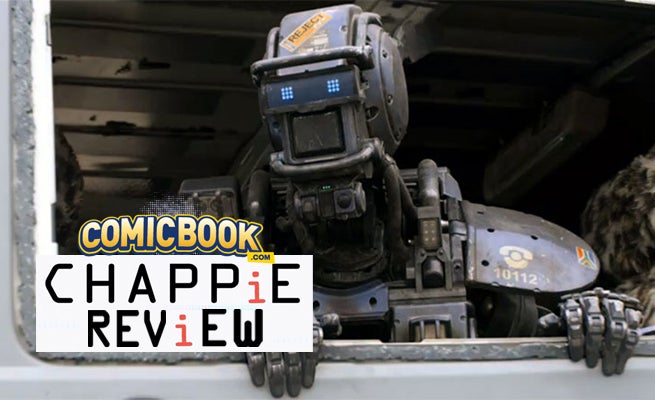 Two movies I want to make mention of are Prometheus and Lucy. While I know Prometheus has its fans and Lucy has a few people who enjoyed it, I didn't like either of them. I'll tell you why- they both started to address a big existential question to which we don't actually have an answer, but weren't brave enough to give the audience even an imaginary answer, solution, or conclusion. Instead, they leave you hanging, wondering why either one started to explore the possibilities stemming from the questions of mankind's origin.

Chappie, however, didn't do that. While it didn't open up the question of where humans came from, it ventured into questions surrounding human consciousness and if it can be created or transferred. I won't tell you the film's answer, but I'll tell you that it was brave enough to actually have a conclusion, and a satisfying one at that.

At first, Chappie looks like it is going to have overly stereotyped villains who belong in a video game. While much of the movie does in fact feel like a video game, it comes together through a plot, that when partnered with outstanding visual effects and solid acting, makes what you're watching feel acceptable. You'll actually care for a thinking, talking, yet not breathing robot and his tattooed lunatic buddies by the end of the film.

Deon (Dev Patel) is a young genius. He is the man behind the robotic crime force containing criminal activity in South Africa. Deon also happens to be working tirelessly on a project to create consciousness in a robot and sure enough, he creates a computer program to do so. It's not that easy, though, because his boss (Sigourney Weaver) won't allow him to try his program out on one of the robots.

I'll leave how it happens to surprise for you, but Deon does eventually find a way to implant his consciousness program into a robot, and of course, creating the one they call Chappie. There's still trouble in paradise, though, because Chappie ends up in the hands of a couple of crazy, and even crazier-looking criminals, Ninja (NINJA) and Yolandi (Yolandi Visser) who want the robot's help in a dangerous heist in order to pay back a few million dollars they owe to their kingpin.

Although Chappie doesn't physically grow, he is raised liked a true child by Deon and the literal gang. He is taught how to read, walk, talk, and all of the other things a child must learn and it is both fun and frustrating to watch as he is pulled in so many directions. The extra trouble comes when former military-man, Vincent Moore (Hugh Jackman) catches wind of the self-aware robot and wants to shut it down.

Watching Hugh Jackman play the bad guy was fun. It was really, really easy to hate him, which is exactly what they were going for. During an event promoting Chappie, Jackman said the goal was to create a character who thinks he's cool and everyone likes him, when in reality, "from the haircut, to the shorts, to the mullet, no one really likes him." Nailed it, Hugh.

While Chappie's growth dominates most of the screen time, all of the plot points culminate into what I can only call an insane climax. The build up explodes in the third act and it any bit of slow pacing from earlier in the film will be immediately forgiven. Neill Blomkamp orchestrates the chaos of the last few scenes impressively. He suddenly shocks the audience with action and violence in a film that has, to this point, been the journey of a humble Chappie growing up.

It would be wrong of me not to compliment Sharlto Copley's performance as the motion capture version of Chappie. The evolution Copley provides to the body language of Chappie is brilliant. Chappie visually transforms from a primitive toddler into a humble, top-dog, martial artist robot, all thanks to Copley's ability to portray the transformation.

The part of Chappie I most appreciated, was that it took the question of consciousness and what it is to be human, and provided a satisfying conclusion, as I said earlier. I won't ruin anything, I promise, but at the end of the movie, Blomkamp provides the audience with an actual ending. While it is still an open ended one in terms of the characters, it isn't when it comes to its questions of consciousness. Despite not being the answer that Blomkamp actually believes in reality, stating he believes, "there is no answer," he was brave enough to provide a conclusion to a film that questions what it is to be human.

Bottom Line: Chappie packs a shocking climax into a movie which focuses on growth, humanity, and innocence. 8.7/10