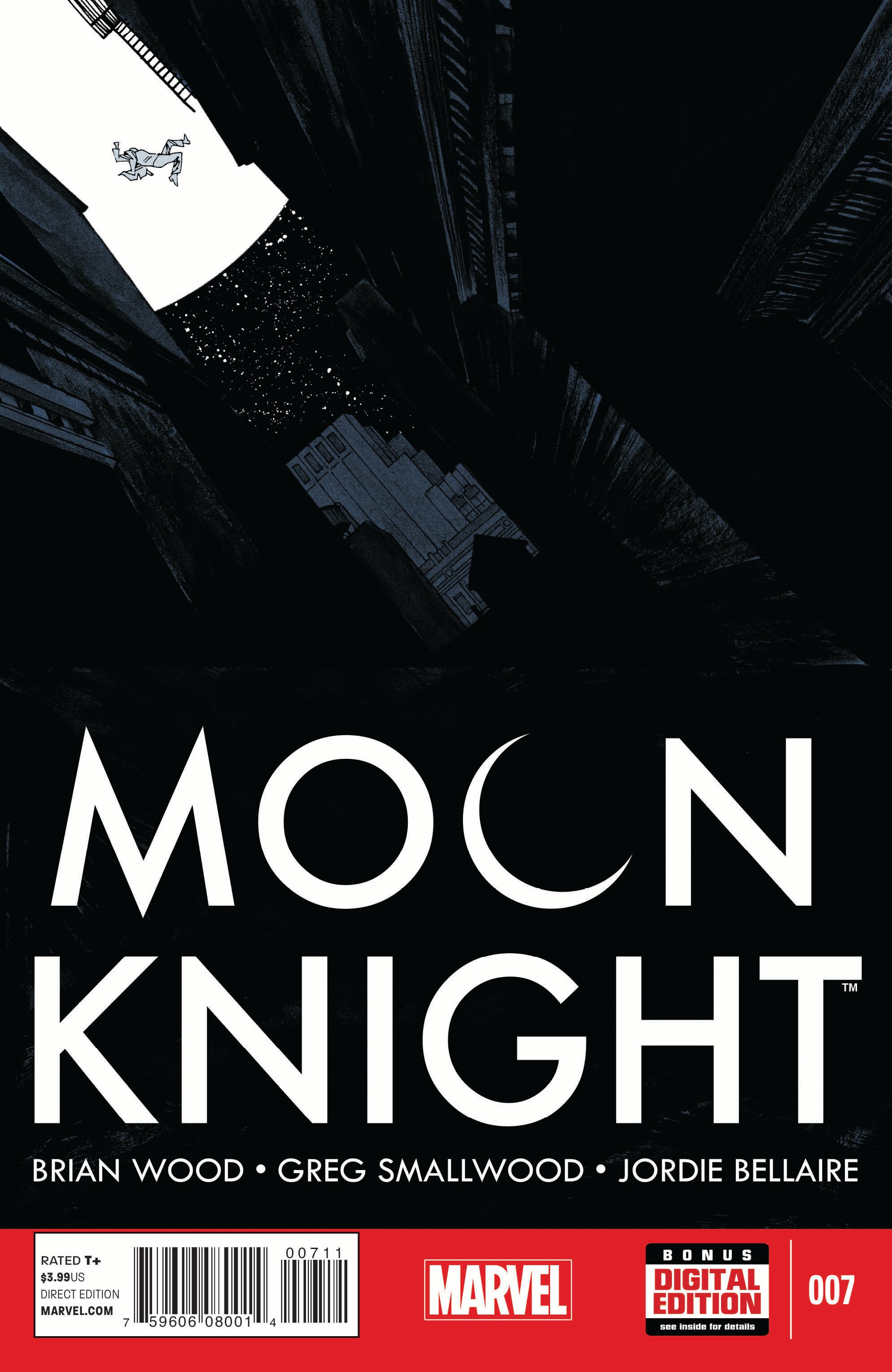 When I first heard that Declan Shalvey and Warren Ellis were leaving Moon Knight after its sixth issue, I e-mailed my comic store to have it dropped from my pull list. I thought that if the sole reason I decided to check the series out was because of the fantastic creative team attached, then why would I stick around after they departed.

This was a very poor decision on my behalf.

The series is maintaining its core concepts. Moon Knight #7 is a story told in a single issue that focuses on Moon Knight, or Mr. Night, as he works to protect travelers at night. That framework introduced by Ellis and Shalvey isn't a hindrance to the new creative team, but serves to bring out some of their best recent work. The limitation of twenty pages to tell a complete story requires that both Wood and Smallwood craft as a story that is both efficient and smart. Smallwood is able to show off skills he has been refining on Dream Thief with Jai Nitz.

Smallwood excels at is providing different perspectives. He effortlessly transitions between the points of view of three central characters, while occasionally splicing in panels taken from a sniper's scope or a drone far overhead. It's not only a show of good storytelling abilities, but also allows for the story to be told more efficiently. His control over three alternating characters allows Wood to provide them each with a role and personality in very limited space.

The highlight of Smallwood's work comes in two separate fifteen-panel pages. Without a single word balloon, each of these pages tells multiple stories. He captures what is impacting the central plot involving Moon Knight, but also the effects of this upon New York City. Police and civilians interact in these silent tapestries providing a rich sense of place and action.

While Mr. Night remains a guardian of travelers, Wood alters the tone of the comic slightly. Moon Knight #7 addresses issues of war crimes, riots, and policing either directly or indirectly. The central plot revolves around issues of justice and war that Wood presents to readers, but does not make any heavy-handed statements about. He leaves the situation open to interpretation, trusting readers to think about the story presented to them. In the chaos of the issue there are also images of police attempting to enforce order in New York City. Sequences showing officers beating unarmed civilians seem somewhat prescient in light of recent events. This change in focus allows Wood and Smallwood to make Moon Knight their own, and may also allow them to tackle subjects outside the purview of what came before.

There are other changes in style as well, but like those in tone, they are not a detriment to the series. Smallwood's line work is softer, but his storytelling is every bit as refined as Shalvey's. Wood writes Moon Knight to be more talkative (as well as a smartass) and makes some inroads to weaving a larger, connected story.

All that means is that Moon Knight is under new management. Wood and Smallwood are not attempting to imitate Ellis and Shalvey, and that is a good thing. They are every bit as talented as the creators that worked on the book previously. Moon Knight #7 keeps what was working and uses it to show off the creative talents of everyone now involved. Moon Knight is in excellent hands and I am on board for wherever they take the story next.