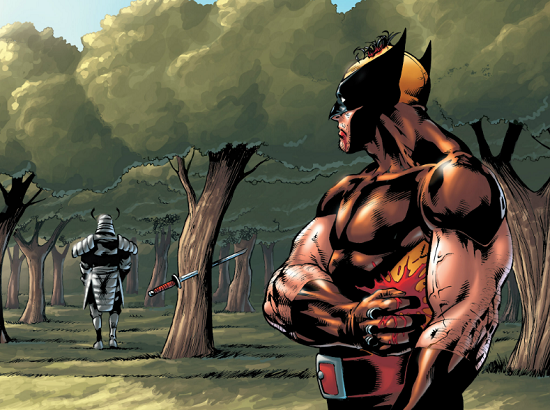 Stan Lee, co-creator of the X-Men, came together with incoming Wolverine and the X-Men writer Jason Latour recently to write an Infinite Comic featuring Wolverine and the Silver Samurai, included as a bonus feature to fans who bought The Wolverine on Blu-ray. Daniel Govar, Manuel Garcia and Bit provided the artwork, which is a bit reminiscent of Joe Quesada's style on Wolverine: Origin. That's likely not a coincidence; while the film this comic was attached to was nominally an adaptation of Frank Miller and Chris Claremont's classic Wolverine work, the pair were never credited onscreen and Quesada's Origin was released as a Marvel Knights animated DVD feature around the time the movie was kicking off in theaters. It seems, a bit like Grant Morrison's All-Star Superman, to be the story that its publisher considers the gold standard for the character. Ultimately, like many Infinite Comics, the success or failure of the work comes down to the artists as much--or arguably more--than the writers. There's a lot of exposition dialogue here, giving it the feeling of an older comic and perhaps Lee's involvement can be felt there. The dialogue isn't bad, but it drives only the plot, not the momentum of the story, which is dictated by the storyboard artist.

Infinite Comics--for those who don't know--are Marvel's somewhat cinematic answer to comics inevitably going digital. Designed for a computer screen rather than a printed page, art can remain static while word balloons move, or a page layout can remain static while art swaps in and out, giving the illusion of movement by characters who are in fact static, two-dimensional images. To that end, the art is...well, it's very similar to Marvel's house style, so if you like what you see in many of the X-Men books right now, you'll likely enjoy the art. It isn't my cup of tea as static images, but Garcia has a sense of movement that works very well in the Infinite Comics format, and of the sixty or so "screens" (it's a fifteen-page story, basically) that the story takes place in, there are only maybe five that feel rushed or a bit badly-paced. That's probably the kind of thing that you'd look right past in a print comic--one bad panel on every couple of pages--but it's harder to overlook given the nature of the Infinite Comics format. Still, the post-production effects (inks, colors and the like) are top-notch and give the comic a sleek, finished look. Marvel Custom Solutions have taken much more absurd content and turned it into enjoyable comics fare, so it's not surprising they pulled this off nicely. The comic, as did the film and admittedly the Claremont/Miller comics before it, gives some credence to the ethical code of a samurai; in a flashback story that informs the content, Silver Samurai's father nearly kills Wolverine but chooses not to, for reasons explained in-story. When his son has taken over years later, he's trying to obtain something that Logan has--and Wolverine replicates elements of that original circumstance, testing the son to see whether he stands up to his father's code of honor. And, of course, it can't be stressed enough that these days, Stan Lee's name might turn up on a lot of projects, but it's still a rare pleasure to read a Marvel Comics story told by The Man. When co-writing, of course, it's difficult to say what exactly is his and what belongs to Latour--but if there were a physical copy of this printed, there's good odds it would sell out just on the strength of Lee's name. Would I buy an entire Blu-Ray just to get my hands on this one comic? Probably not--but then, I'm not a big fan of Wolverine as a stand-alone character; I prefer him as an X-Men team member. The film itself is well worth the price of admission, though, and as "free" bonus comics go, this is a fun, compelling read and a great look at how a comics adaptation of the cinematic Wolverine might play out. Exploring similar themes and visuals as the film but using him in his traditional costume, it's a bit like the Smallville Season Ten comics: the best of both worlds, and a treat for those who enjoy both worlds anyway. Wolverine Infinite Comics: Custom Edition #1 is available as a free bonus feature with the purchase of The Wolverine, standard or Extended Editions, on Blu-ray. The movie was released on Tuesday and is generally one of the featured new releases at any online or brick-and-mortar retailer.