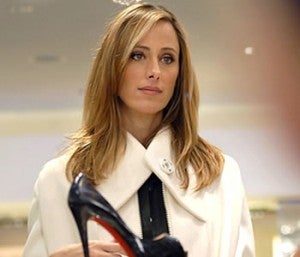 Kim Raver, best known to fans for her long runs on 24 and Grey's Anatomy, has signed on for a recurring part on NBC's freshman drama Revolution, according to TV Line. No details are available yet on the role, but it's described as "pivotal." Revolution officially launches September 17 on NBC, but you can watch the pilot on their website. The show revolves around a near-future where the world has lost the capacity to produce electricity, hurling modern society into chaos. At the center of the show is a group of survivors trying to turn the lights back on, and a community of militants led by Breaking Bad's Giancarlo Esposito, who is himself no stranger to NBC, having just had a significant guest appearance on Community. Raver, who also had roles on Lipstick Jungle and Third Watch, got her start on Sesame Street. You can see her below (or at least that's what YouTube tells me) helping Shelly find his courage.