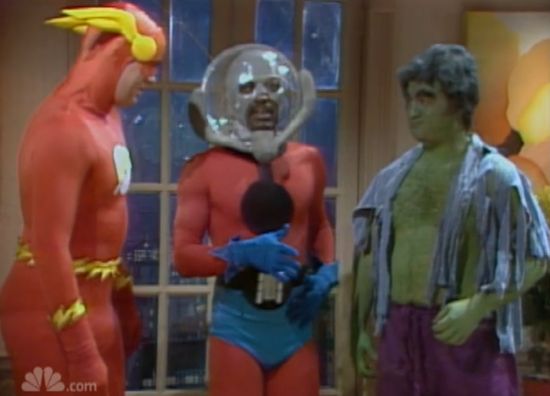 Last night, Anne Hathaway hosted Saturday Night Live. She was the second cast member from The Dark Knight Rises to host Saturday Night Live this season. And just like when Joseph Gordon-Levitt hosted earlier this season, SNL failed to do a single skit revolving around this summer's biggest blockbuster. Instead Anne Hathaway's opening monologue revolved around her upcoming appearance in Les Miserables. Of course, it makes sense that Hathaway would want to promote an upcoming movie, rather than one that is already out of theaters. We just wish the monologue skit had been funny, as it seemed to drag on forever. In fact, the entire episode kind of fell flat, as Deadline pointed out the show even failed to gain laughs with its 2012 Election skits. In general, Saturday Night Live seems to be out of touch with viewers of late. As disappointed as we were that Saturday Night Live failed to mine comedy gold from Anne Hathaway's role as Catwoman, we couldn't help but smile when we started thinking back to an earlier time on Saturday Night Live and a hilarious superhero skit. Looking back at the Saturday Night Live Superhero Party, it's still funny today for so many reasons. Not the least of which is that when Ant-Man shows up at the party, the Flash can't remember who he is. Then, Flash and the Hulk proceed to make fun of Ant-Man's powers. The irony of the whole skit in the modern day is that Ant-Man has his own movie in development for 2015, and a Flash movie doesn't appear to be coming anytime in the imminent future. In the skit, Superman and Lois Lane are also still together, hearkening back to a simpler time before the DC Comics reboot and the new relationship with Wonder Woman. The funniest part of all though has to be John Belushi as the Hulk. We wish Saturday Night Live still put out skits like this.