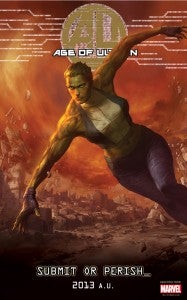 Okay, so maybe Marvel backed down (or the art was misleading, depending on who you believe) when fans got upset about Carol Danvers's hairstyle on the cover of Captain Marvel #1 last year. This time around, there's little doubt--that's a very short haircut on She-Hulk, in the latest of Marvel's "Submit or Perish" teasers for Age of Ultron. Interestingly, She-Hulk here joins Black Widow and Red Hulk, all of whom have government connections; while She-Hulk isn't traditionally the military type, she's been involved in the legal system for years, which made her a target of a lot of controversy during the Civil War event. Could there be a message to these teasers, in the sense that while the story starts with Ultron having "won," the first characters we see spotlit on teaser ads are all people with a connection to the U.S. government? She-Hulk is tenuous, but when the theory already existed before this teaser came along, she does nothing to debunk it. Age of Ultron begins in March from Marvel Comics, by writer Brian Michael Bendis and artist Bryan Hitch. Expect more of these teasers throughout the week.

She-Hulk Gets a Haircut in Age of Ultron Teaser