The Silver Age of comics is unquestionably historic as it marked the beginning of many of the industry's most iconic and venerable heroes and superteams like the Fantastic Four, Spider-Man, the Justice League and the Avengers. However, as critically important as these comics are, many of these series are also filled with silly, off-beat moments that would likely never find their way into today's comics.

Silver Age Silliness is a recurring list feature that both celebrates and playfully mocks these moments. Any snark and sarcasm found in these lists comes from a place of love and ultimately, respect. It's just that the silliness needs to be pointed out and laughed at from time to time.

We'll kick off this series by look at the early years of Gardner Fox's Justice League of America – DC's first true superteam which debuted in March 1960 with The Brave and the Bold #28. For the purposes of this list, all moments were taken from DC'S Showcase Presents Justice League of America vol. 1, which collects the team's first three stories in The Brave and the Bold and the first 16 issues of the league's own series. 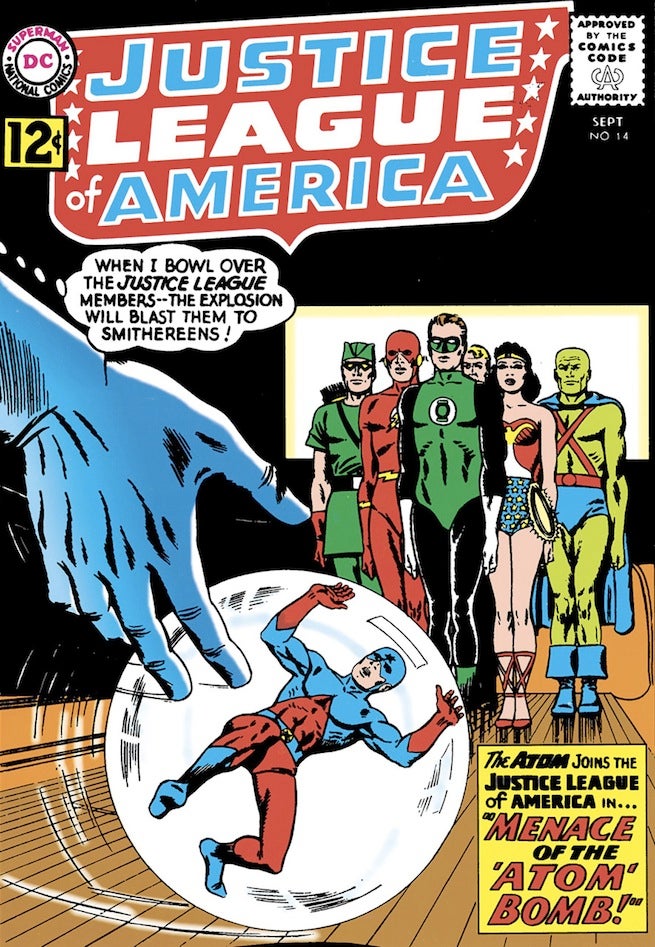 5. The Menace of Bowling Ball Atom

From: Justice League of America #14

Ten issues after the Justice League first expanded its cast of heroes (by electing Green Arrow to the team) the league brought aboard Roy Palmer, better known as the diminutive Atom. Weirdly enough, Justice League of America #14 kicks off with all of the standing members of the league voting for Atom without even knowing who he is. So they decide to travel to his hometown, Ivy City, to learn more about the newest member of the most important superhero team in the DC Universe (road trip everybody!).

Still, that's not even the silliest part of this comic (come on, how many times have any of you voted for somebody that you knew nothing about? No judgements!). That would come in the death-defying final act, when the league is captured by the villain, Mister Memory, whose diabolical scheme is to freeze each hero in time, line them up like bowling pins, and then roll an imprisoned Atom (who is stuck inside a ball, 'natch) towards the Justice League in order to blow them up.

To paraphrase the great Scott Evil from Austin Powers, why Mister Memory just didn't shoot the Justice League as they were all standing their completely frozen and powerless is just the kind of question the creators of this comic don't want you to ask. Because then that would have deprived fans of seeing Atom, the killer bowling ball.

Also, one has to think that Memory must have been a bowler worthy of the PBA if he just assumed that his roll of the Atom would knock out all eight members in one fell swoop. 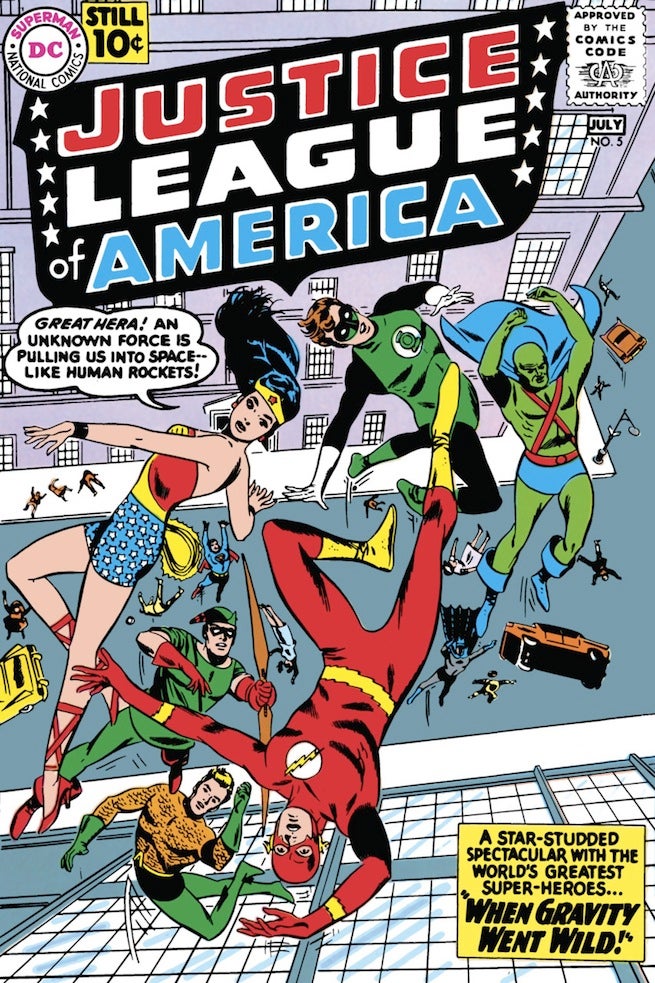 From: Justice League of America #5

Before Atom joined (see No. 5) the Justice League finally expanded its ranks three whole issues after getting their own series (and seven total issues into the team's existence) when they elected Oliver Queen, aka, the Green Arrow.  So, naturally Arrow's allegiances and loyalties were immediately put into question one whole issue after he joined the team.

Yep, rather than attempt to ingratiate readers to the idea of Green Arrow being a part of DC's most star-studded assembly of heroes, Justice League of America #5 instead introduces the group's Kangaroo Court in order to put Oliver on trial for interfering in the capture of Captain Cold, Clock King and Professor Menace. Apparently the group was put off when they were closing in on the villains and Arrow fired off a couple of exploding arrows, allowing the bad guys to escape.

Rather than have Green Arrow explain his actions at the scene of the action, they bring him all the way back to accuse him of treachery. It's, of course, all a misunderstanding – Arrow only made those shots because he was too far away to warn the others that they were about to step into a trap – but wouldn't one think that Oliver's character was fully vetted before joining the league the issue before? 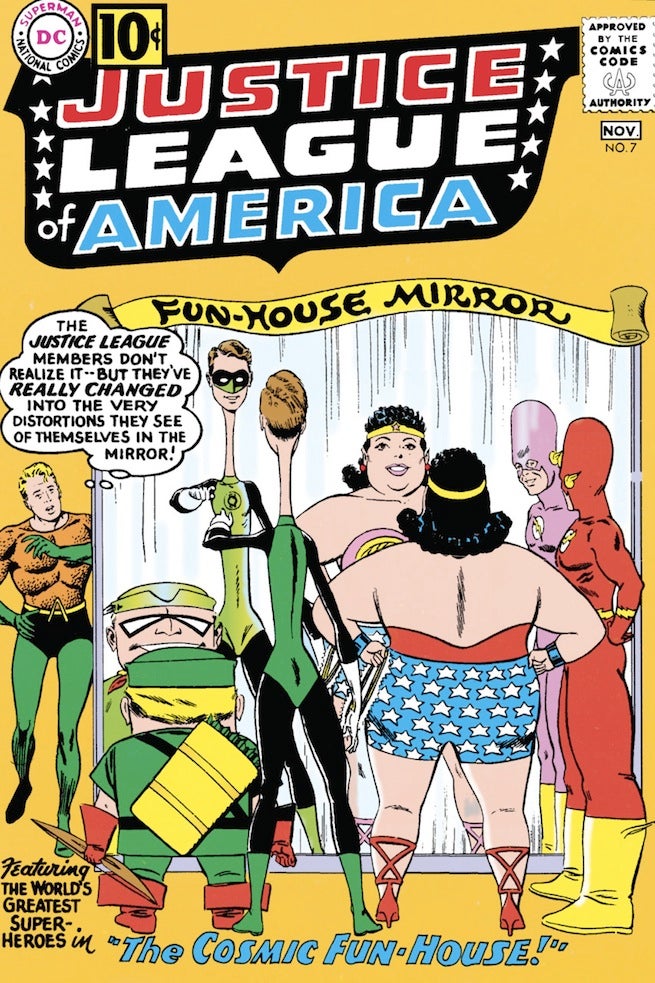 From: Justice League of America #7

This is one of those instances where you can judge a comic book by its cover. The front page image in Justice League of America #7 is an illustration of Green Arrow, Green Lantern, Wonder Woman and Flash with highly exaggerated physical features; the foursome are apparently victims of a "cosmic fun-house."

Inside the comic, the cover visual comes to fruition when an alien named Xotar plots to take over the Earth by first conquering the Justice League by subjecting them to a cosmic carnival. Xotar temporarily succeeds with his plot and captures the aforementioned members of the league, transforming them into physical freaks. As if the visual of a short and stubby Green Arrow waddling next to a grotesquely overweight Wonder Woman wasn't humorous enough, the story tops itself when all four heroes complain about their newfound physical ailments – the best of which is Green Lantern whose neck is so far outstretched, he can't remember who he is (must be a blood flow to the brain problem). 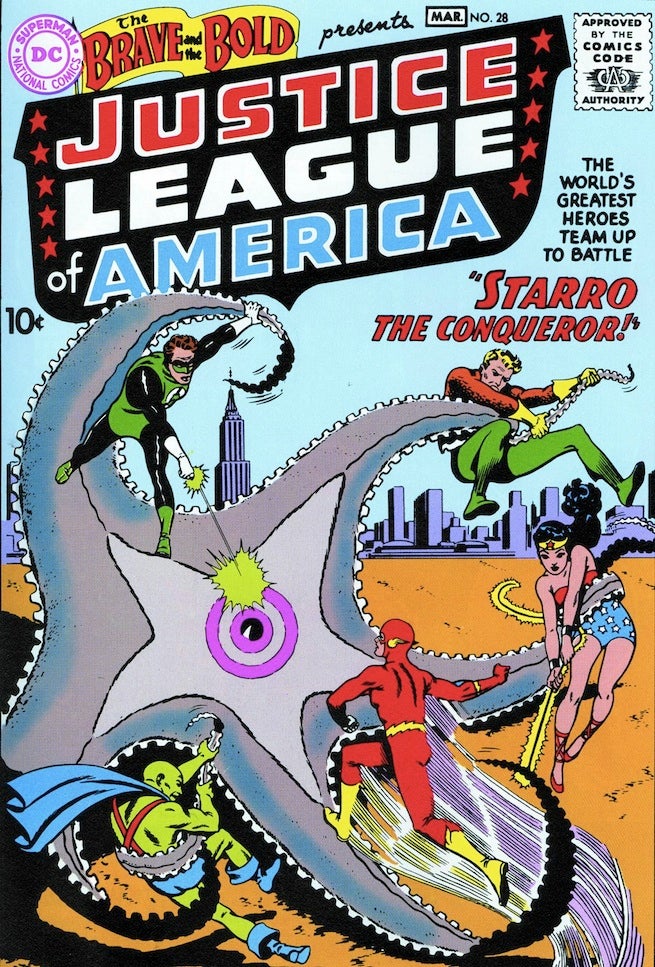 2. The First Fight with Starro

One would think that for the historic inaugural appearance of DC's first-ever superteam, a villain of equal status and clout would be lined up to take on the Justice League. Perhaps an adversary as brilliant as Brainiac, or as nefarious as the Joker, or as cunning and cutthroat as Lex Luthor.

Instead, in their very first appearance, the league combined their speed, powers and might to defeat Starro the Conqueror – a giant alien starfish.

Despite being a giant starfish, Starro actually wasn't a pushover. He's resistant to machinegun fire from an aerial attack and even manages to detonate an atomic bomb. In Happy Harbor, RI, an agent of Starro's manipulates the entire town with mind control powers. But the shock and awe of Starro quickly circles the drain when the league discovers the key to defeating him: lime. This substance, which most people use to treat their lawns, has an adverse effect on starfishes (as Aquaman was quick to point out). Green Lantern uses his power ring to sprinkle a barrel of lime on Starro and the league very first threat is vanquished. Take that high school chemistry! 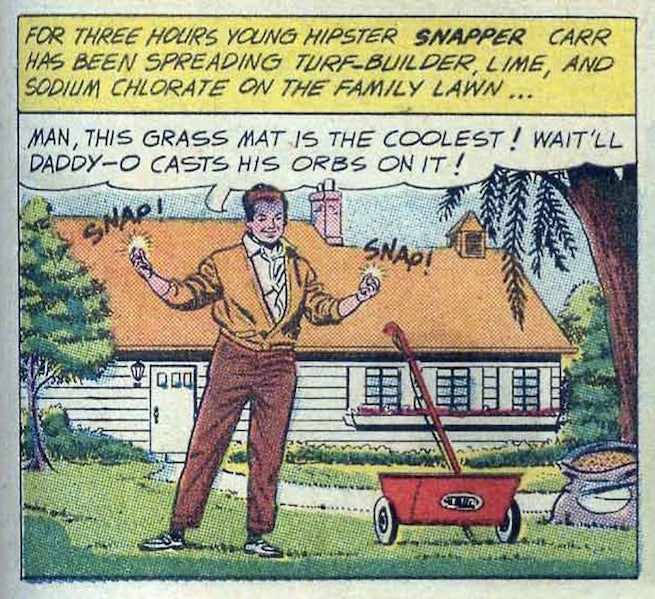 Before there was Poochie the Dog (or Rick Jones for those who find his character to be beyond irritating), there was the catchphrase toting, finger snapping Lucas "Snapper" Carr, a real hip cat who became the Justice League's unofficial mascot during its initial Silver Age run.

As rumor has it, as the Justice League was being developed, a DC executive thought the team needed a younger character that readers could identify with. So Snapper was inserted into the team in their very first appearance in The Brave and the Bold #28 – in storyline terms based on his good fortune of having a lawn that was treated with lime (thus repelling Starro the alien starfish). Snapper is ultimately harmless, but all these years later it still seems quite odd that the world's most powerful and iconic assembly heroes would just accept some random teenager as an "honorary member" based on the fact that he sprinkled some lime dust on his front lawn. Basically, the character would just show up, snap his fingers and talk in "hip" Beatnik language (that typically ended in a rhyme) and then leave the very next page.

Snapper's Justice League membership did end in a bit of disgrace when he was manipulated by the Joker and accidentally leads the villain to the league's Secret Sanctuary meeting place. He went on to resign his honorary membership in Justice League of America #77.

Or as Poochie would say, he had to go back to his home planet.