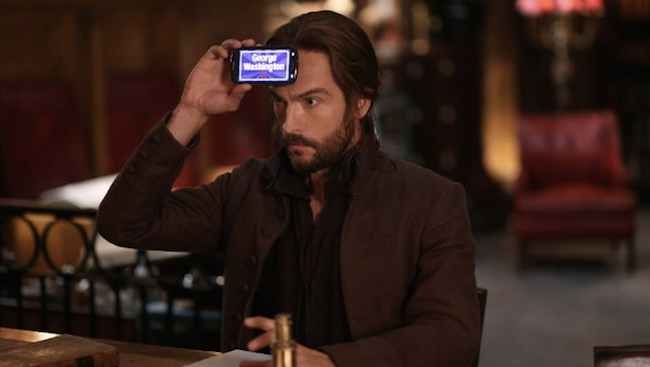 Episode ten of Sleepy Hollow, “Magnum Opus,” finds Abbie (Nicole Beharie) and Ichabod (Tom Mison) playing “the celebrity game” in a desperate attempt to distract their conscious minds, so that their subconscious minds might finally realize something about Grace’s ancient journals. Ichabod quits quickly, especially after Abbie refers to George Washington (the “liar in chief”) as the man who can never lie.

Katrina (Katia Winter) appears to them in a window, saying that Moloch is alive and growing quickly. She leaves when she hears a noise, fearing Henry has discovered her. Next, Henry (John Noble) is shown at the mirror, listening in on everything Abbie and Ichabod do next. He allowed Katrina to connect with them so that he would be able to use the mirror.

Ichabod finds Katrina’s appearance a suitable distraction for his subconscious mind, and he makes a discovery about Grace’s notes: “Chosen words” is an anagram for “Enoch’s sword,” a mythic sword that can kill demons like Moloch.

Abbie soon gets a text detailing that Sheriff Reyes is on the hunt for Captain Irving (Orlando Jones), so Abbie tips of Jenny (Lyndie Greenwood), who is currently trying to driving Irving out of the country.

Ichabod next realizes that the classic “join or die” poster, created by Benjamin Franklin, is actually a map, where the snake’s curves mimic the local river. The snake’s tongue reveals the location of Enoch’s sword. They plan to retrieve the sword, reminding themselves of their final prophecy, which says that in the final battle they must know themselves, or they will die.

Henry, hearing their plans, orders Abraham (Neil Jackson) to get the sword first. Katrina tries to stop him on the way, acting like she has something personal to tell him, but he leaves angrily.

When Jenny and Irving approach a police checkpoint, he jumps out of the car to keep her safe. She gives him a burner phone, and they plan to meet up later, with her ultimately sneaking him into Canada. 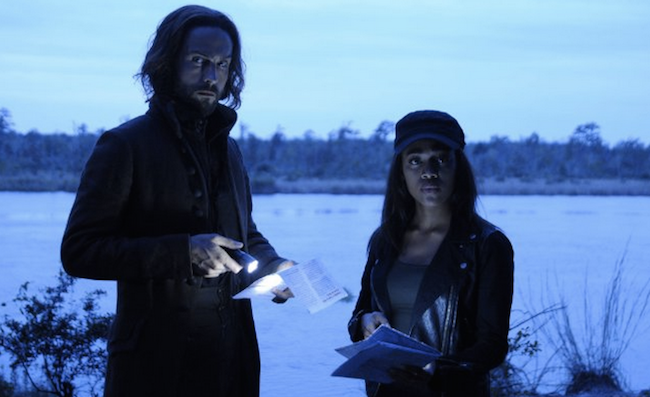 Abbie and Ichabod follow the “join or die” map to the snake’s tongue, which brings them to an old building in the woods. It’s the same location that Abbie saw her mother in the purgatory dream. Abraham appears, and while hiding, they observe him looking for the sword.

He snatches up a plaque and starts to pursue Abbie, who has moved toward the building. Ichabod distracts Abraham by shouting his name just as the sun begins to rise, forcing the Horseman to head home.

Ichabod reminisces about his past with Abraham, and a flashback shows Abraham convincing him to join the army. Ichabod thinks that their fates have always been intertwined, which he thinks confirms the prophecy.

Another flashback further cements this idea, when Ichabod realizes that Katrina’s presence his influenced him heavily as well. How can he know himself truly, if his fate has been decided by others?

Abbie recalls the plaque that the Horseman took, drawing it in the dirt. Ichabod recognizes it as a snake eating its own tail, representing the phrase “as above, so below.” Abbie interprets this as meaning there might be a door right below them. Sure enough, they find a door under the bricks and descend down a windy staircase.

Inside, they find statues of people cowering away. One of them looks just like Grace, and Ichabod begins to think that the statues might be of real people who have turned to stone. He tells Abbie to run away and not to look back. They escape and close the door just in time as a monster follows them.

Ichabod identifies the creature as a Gorgon, which turns people to stone when they make eye contact with it. Abbie plots that they can lure the Horseman to the Gorgon – since he does not have eyes – getting him to kill it for them.

Elsewhere, Jenny gets a voicemail from Irving. He doesn’t want to leave the country and has to decided to go his own way. 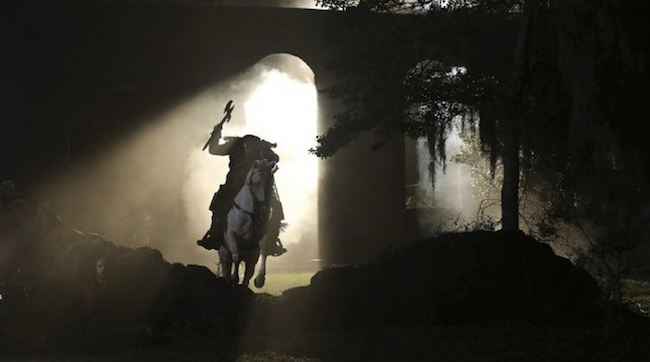 At the Manor, Henry shows an ancient shofar horn to Katrina. Moloch will blow the horn to summon his followers when he is ready. Henry admits that he knows that Katrina tried to poison him.

Abbie and Ichabod wait until nightfall for the Horseman to arrive. When he gets there, they throw flares into the Gorgon pit and jump in. The Horseman follows them and quickly engages in a battle with the Gorgon. While they’re distracted, Abbie and Ichabod run to the back of the tunnel to a room. Inside, they find many swords and do not know which is Enoch’s.

Ichabod offers to further distract the Gorgon and the Horseman while Abbie figures out which sword is correct. Ichabod leaves to find Abraham, who has beheaded the Gorgon. Ichabod can now see Abraham’s face thanks to the enchanted cave, and the two engage in a deciding duel.

They fight, sword versus axe, as they argue angrily about their past. Abraham says that Ichabod stole everything from him, but Ichabod re-iterates that it was Abraham who chose Moloch’s path. Sore spots are prodded when they talk about Katrina, and Abraham picks up a gun.

Ichabod runs to Abbie, who still hasn’t figured out which sword is correct. She picks one seemingly at random, but once she pulls it out of its port, it turns into a snake along with all of the other swords. Abraham makes it to the room, ready to shoot them both.

Just as Abraham is about to shoot, Moloch’s shofar is heard, summoning him back. He and Ichabod exchange final words about their destinies before he storms away. Ichabod tells Abbie that the horn is from the Book of Revelation, fearing that they are too late. They begin to bounce ideas off each other about solving the sword riddle.

They find that a pool of water in the center of the room is actually oil. He puts his torch into the oil, but the fire is simply snuffed out. Working together, with two torches, they burn the oil, revealing the sword. Ichabod pulls out the luminescent sword dramatically and says “we shall not witness the Apocalypse on this night.”

The episode ends at the Manor, where Henry stands near a circle of fire. He says “the time has come,” as a devil-like figure appears in the corner of the screen.