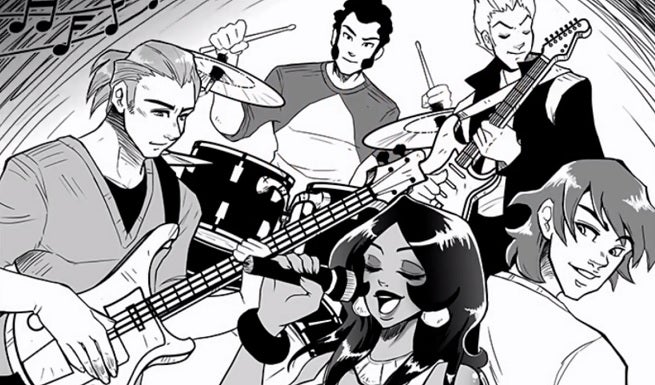 A common critique of music-related comics is that, comic books being a visual medium and all, the music itself often doesn't really come across.

Well, popular webcomic Sparkshooter by frequent Zenescope and Dynamite comic book writer Troy Brownfield seems to have resolved that, per a new trailer we've found floating around on YouTube.

The remaining members (guitarists Sean and Elihu, bassist Lowell, drummer Michael) decide to stick together and redefine their sound, pushing a reluctant Sean back toward the front-man slot he once willingly surrendered. However, Sean thinks that the new frontperson should be the mysterious young lady that the boys see singing karaoke. As luck would have it, Sondra Li is a friend of their buddy and former manager Jack Spencer, and he in fact arranged for Sondra to show up. Now, the boys prepare to meet Sondra for the first time. With Sondra in place, the groups sets their sites on blazing a new trail on the scene, even as other challenges arise.