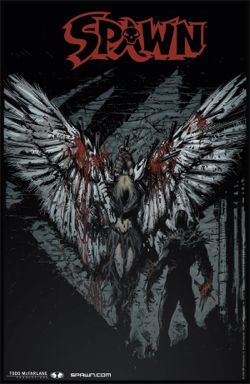 Todd McFarlane's Spawn series is hot again. The Spawn saga was recently relaunched by series creator Todd McFarlane and fellow Image Founder Whilce Portacio. The relaunch storyline called "Endgame" is now at its halfway point and the latest issue was a distribution-level sell out. "Our goal is to slowly build up momentum and the sellout of issue #191 is another indication that we're accomplishing that goal," McFarlane said. "With a majority of our single issues out of print, the release of the first Endgame collection couldn't be more timely." "Endgame" has seen the original Hellspawn, Al Simmons, end his life as the amnesiac Patient 47 awakens with Al's powers. Also, new horrors and allies have come into play with familiar faces, including Al's widow, Wanda and his nemesis, The Violator. The next several issues of Spawn will tell the story of Patient 47's transformation into Spawn as the truth about his identity is finally unveiled. Fans who missed out on the first half of "Endgame" are in luck because there is a trade paperback in the works. Spawn #192 will be a 32-page full color comic book for $2.95. Spawn #192 is scheduled to arrive in stores on June 3rd, 2009. Spawn, VOL. 1: Endgame Part 1is a 160-page full color tradepaperback for $14.99. The Spawn, VOL. 1: Endgame Part 1 tradepaperback is scheduled to arrive in stores on June 24th, 2009.

Spawn Engame Is Selling Out