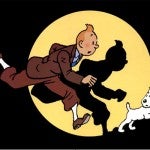 Typically, Steven Spielberg films debut in the U.S. before heading overseas. Not this time. Spielberg's 3-D film, "The Adventures of Tintin: Secret of the Unicorn", will premiere in overseas market in October. The movie won't make it's debut in the U.S. until December 11, 2009. Why the switcharoo? Tintin has long been adored outside the U.S. The studios (Paramount and Sony Pictures are co-distributing) are hoping that positive word of mouth in Europe will spur audiences in the States. I'm not sure if this is a good idea. One one hand, it shows confidence in Spielberg and the Studios. They appear to believe this film is good enough to garner solid reviews (and not wreck any chances of a solid U.S. box office take). On the other hand, if they do think the movie is good, why not release it in the U.S. at the same time? What do you think? Good move or mistake?