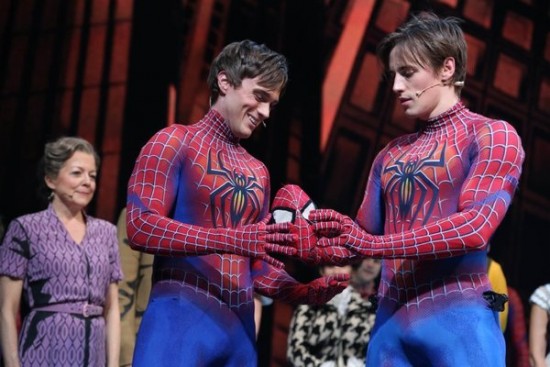 Stan Lee Media, a company with no ties to Marvel Comics legend Stan Lee in the last decade or so, nevertheless holds among its handful of properties a document signed by Lee and handing over the rights to any superheroes he might create. Most recently, according to The Hollywood Reporter, they've sued a theatre company in Pennsylvania for using songs from Spider-Man: Turn Off the Dark in a recent production without permission. In response, the company--American Music Theatre--inked a licensing deal with SLM, effectively giving them their first known outside revenue from a Marvel-owned character. Marvel have now sued, saying essentially that the license wasn't theirs to issue--although they seem only concerned with preventing Stan Lee Media from interfering with future live, staged Marvel productions, not with American Music Theatre's existing production, which is a Broadway revue and uses comparably little Spider-Man material. As many of our readers will know, Stan Lee Media has been using that document for quite some time to stake a claim on Marvel Entertainment's stable of superheroes, many of which were co-created by Lee during his time as a writer and editor at Marvel Comics about fifty years ago. No judge has yet found in favor of Stan Lee Media; Lee had long since renounced his rights to the characters he worked on for Marvel before his company ever went belly-up and started combing through the contract for ways to squeeze blood from a stone, and his ownership of characters created while under a work-for-hire contract was questionable to begin with. Nevertheless, the position held by SLM is that Lee has the rights to contest ownership of characters he co-created and that, as a result of his broadly-worded contract with his former partners, they can exercise those rights essentially on his his behalf, whether he is interested in doing so or not. "The time has come for this Court to end once and for all SLMI's vexatious and repeatedly-rejected claims of ownership over the Marvel Characters," a Marvel/Disney lawyer said in its most recent filing, claiming that even if there were any merit to the argument that Lee had rights to the characters, they should have attempted to exercise those rights in 1998 when the agreement with Lee was signed, rather than waiting until years after their bankruptcy and filing what's widely seen as a Hail Mary lawsuit. Apparently former Relativity Media investor Elliot Management is dumping money into Stan Lee Media's attorney fees, again with the idea that the potential upside is massive relative to the cost in legal fees if they lose.