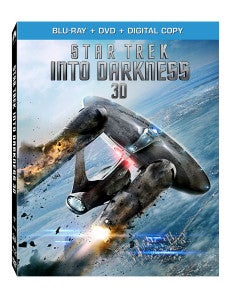 Paramount Pictures have released the official box art for Star Trek Into Darkness, and revealed that the film will come to DVD and Blu-Ray on September 10. "I'm excited for viewers at home to check out Star Trek Into Darkness on Blu-ray and DVD," said J.J. Abrams. "They did a great job and I'm thrilled with how everything looks and sounds. We also have some really fun behind-the-scenes special features that we shot on the Red and created entirely in-house at Bad Robot. They really look amazing and unlike anything I've seen on DVD or Blu-ray before." Abrams added "I hope fans enjoy seeing the process that went into making the movie and the truly amazing work of our most spectacular cast and crew." The DVD will feature a stripped-down version of the film, but the Blu-Ray is feature-rich. You can check out a list of features below: -Feature film in high definitio -Creating the Red Planet – Experience the creation of a never-before-seen alien world, as featured in the action-packed opening sequence of the film. -Attack on Starfleet – Go behind the scenes with the cast and filmmakers and witness the creation of the shocking attack on Starfleet Headquarters. -The Klingon Home World – Discover the stunning world of Kronos, and see how the filmmakers reinvented the Klingons for a new generation. -The Enemy of My Enemy – Find out how, and why, the identity of the film's true villain was kept a mystery to the very end. -Ship to Ship – An in-depth and thrilling look at the filming of the iconic space jump sequence, which both defied the laws of physics and pushed the limits of visual effects. -Brawl by the Bay – Sit in with Zachary Quinto and Benedict Cumberbatch as they revisit their intense preparation for the film's breathtaking climax. -Continuing the Mission – An inspiring look at the partnership between the film's crew and the organization that assists returning veterans to find meaningful ways to contribute on the home front.