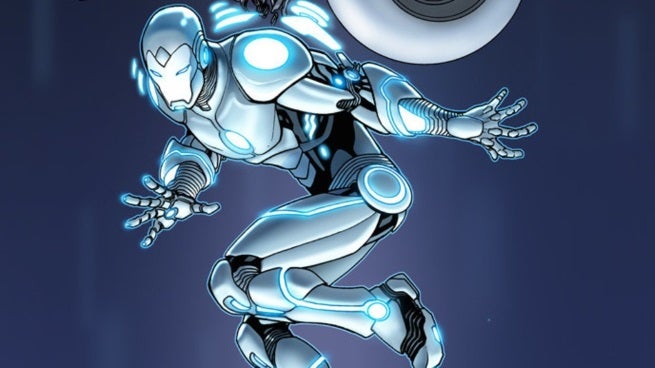 The changes keep coming for Marvel's "trinity" of Avengers. As part of its Avengers NOW! Initiative, Iron Man will join Thor and Captain America in having a dramatically new status quo come the Fall. Superior Iron Man #1 will debut in November and will feature Tony Stark traveling out to San Francisco with both a new costume and outlook on life. And similar to 2013-14's Superior Spider-Man, Superior Iron Man will be a considerably darker, more morally ambiguous read.

Still, this won't be the first time Marvel gave readers a "darker" version of Tony Stark. As the Marvel Universe's most famous playboy and industrialist, Stark has long tap-danced on the line of decency participating in  a number of storylines where he's been outrageously selfish, betrayed friends and teammates, and in one instance, even murdered (while being mind-controlled from another timeline). 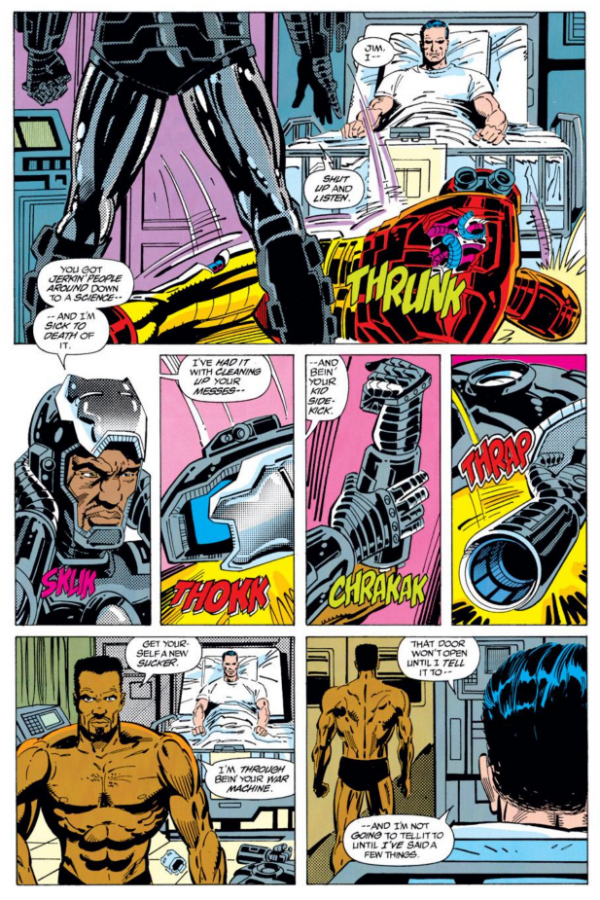 Tony Stark was good at burning bridges in the early 90s, and even spurned his long-time best friend (and occasional fill-in as Iron Man) James "Rhodey" Rhodes. During the Len Kaminski/Kevin Hopgood 1992-93 run on Iron Man, Tony's health – mainly his central nervous system – has deteriorated so much he fakes his own death, and turns over the responsibilities of being Iron Man and CEO of Stark International, to Rhodey.

The only problem in all this is that Tony didn't actually inform his friend that he was faking his death. And when Rhodey finds out he is justifiably ticked off that he went through so much trouble arranging a funeral, scattering Tony's ashes, running Stark, and putting his life on the line as Iron Man/War Machine.

To his credit, Tony does make multiple attempts to apologize to Rhodey – all in vain. The two eventually have to team-up in Iron Man #291, but by the end of the story Rhodey decides to leave his buddy and take his suit of armor with him, officially ushering in the "War Machine" era. 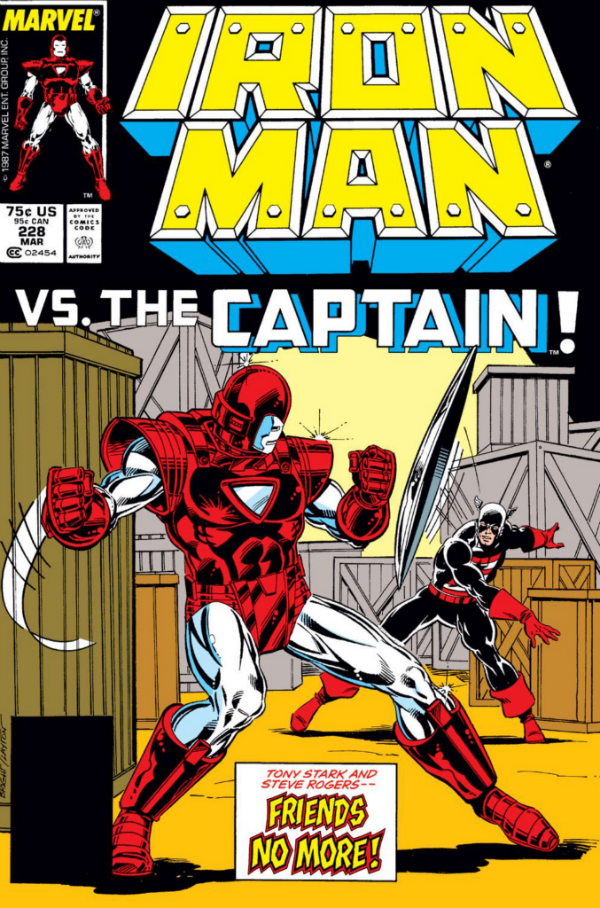 In one of the more famous and beloved stories during the epic David Michelinie/Bob Layton run on Iron Man, Tony Stark discovers that someone has sold his Iron Man technology to his rival, Justin Hammer. Enraged, Tony sets out on an one-man mission (with some help from Rhodey) to go after anyone who's using his technology – hero or villain.

In Iron Man #228, Tony finds himself face-to-face with his longtime ally Steve Rogers, who is going under the alias "The Captain" at this point in time. Stark infiltrates the government-run Vault super-prison after learning that its Guardsmen are using Iron Man technology in their armor. Stark's rampage is interrupted by Rogers, who tries to reason with his old Avengers teammate by telling Tony that he understands his outrage, but his methodology of indiscriminately attacking anyone with armor is dishonorable. Tony refuses to back down, which leads to Iron Man and Cap fighting each other. The battle ends when Cap passes out from a shortage of oxygen. Tony takes off, having successfully disarmed all of the Guardsmen.

The storyline is very significant for the Iron Man/Captain America dynamic because while the duo had experienced some friction in the past, this was among the first times their philosophical differences led to a prolonged physical altercation.

The Iron Man/Cap battle also sowed the seeds of dissention among the rest of the Avengers team, as most members were unexpectedly faced with picking between "Team Tony" or "Team Cap" (as seen in the next entry). 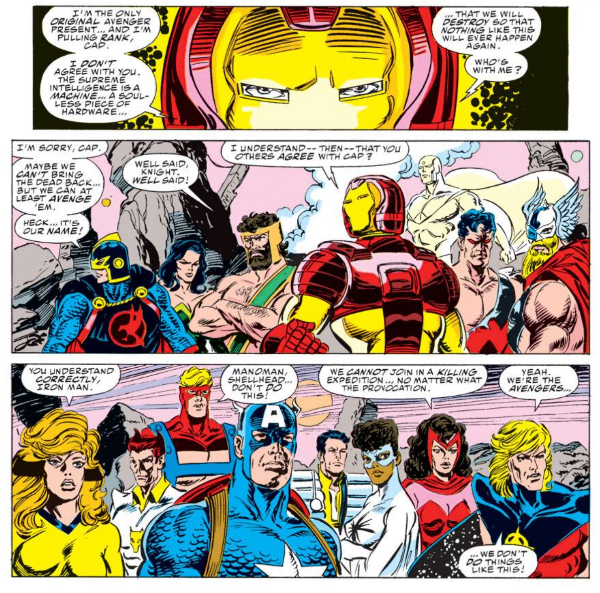 Building on the dissention that was first posited during "Armor Wars," the "Operation: Galactic Storm" crossover, a pseudo-sequel to the 1972 cosmic epic, "Kree/Skrull War," reaches a fever pitch when the Shi'ar race detonate a "Nega-Bomb" on the Kree homeworld, killing billions. It is later revealed that the Kree Supreme Intelligence actually manipulated the bomb denotation against his own people as a means to jumpstart the Kree's evolution as a race. Iron Man, and other select members of the Avengers are outraged when they hear this, and in Avengers #347 decide that the Supreme Intelligence should be killed for this act of genocide.

Captain America, who earlier in the arc mandates "Avengers don't kill," disagrees with Tony. The group takes a vote and the majority side with Cap. But Tony pulls a power play and claims as a "founding member" of the Avengers (which Cap was not), he has a right to punish the Supreme Intelligence as he sees fit. So Stark and a scattering of teammates which include Thor, Vision and Wonder Man, go off to kill the Supreme Intelligence, leaving Captain America and the rest of the Avengers disgusted and disgraced.

Cap is so disenchanted by Tony's stunt, he starts to distance himself from the Avengers. Tony, meanwhile, quits the team outright, disbanding the West Coast Avengers and starting up Force Works, a team that would be more aggressive and proactive in dealing with threats than Cap and the East Coast Avengers. 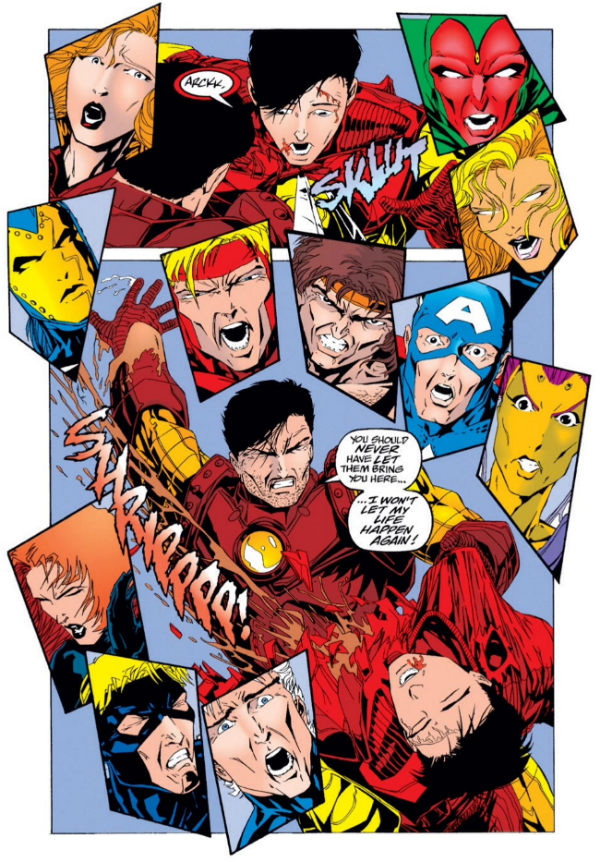 Ah, the 90s, the only decade in comic book history where a lifelong superhero can magically turn evil and murder his teammates and the storyline is overshadowed by a host of even weirder events taking place in other series.

For Tony Stark, "The Crossing" was his "Clone Saga" and "Knightfall" rolled into one. At the start of the story, Stark unwittingly kills Quicksilver/Crystal's nanny Marilla, and later the female Yellowjacket, Rita DeMara. His teammates finally discover that he's gone insane after years of mental manipulation courtesy of the time traveling villain Kang. When Stark gears up to kill the rest of his teammates, they go back in time and bring back Tony's 19-year-old self from an alternative timeline. At the sight of his younger self, Tony comes to his senses and sacrifices his life to stop Kang and save the Avengers. Teenage Tony would stay with the team until the Onslaught/Heroes Reborn event in 1996.

The whole thing would later be retconned out of existence, first by Heroes Return and then more substantially in the Avengers Forever limited series. But how can we ever truly forget the time Tony Stark became a full-fledged murderer? 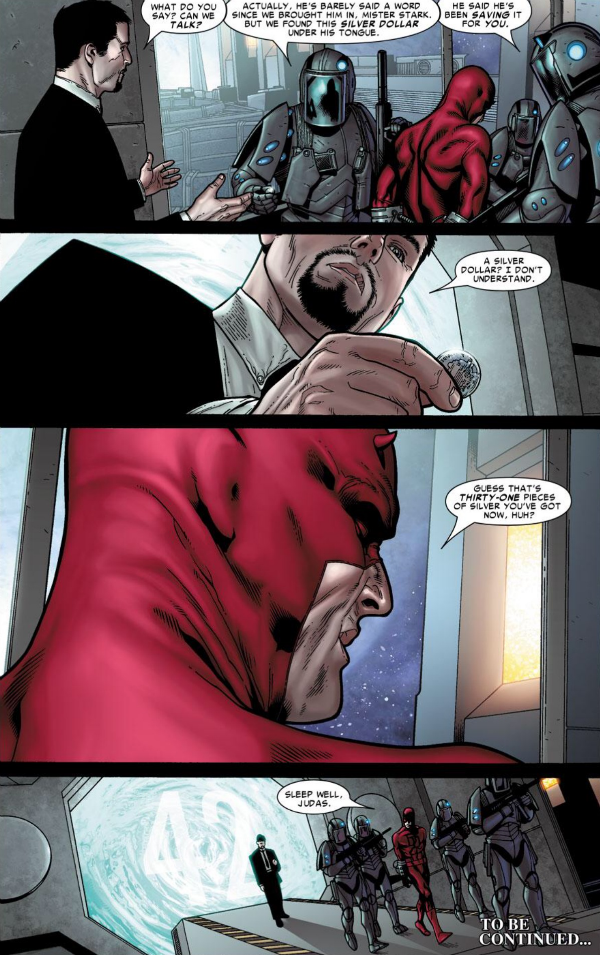 In the mother of all heel turns, Tony Stark becomes the most hated character in the Marvel Universe when he famously comes out in support of the Superhero Registration Act – a controversial Congressional proposal that would require all superheroes to register their private identities with the government. While Stark has some supporters, most notably Reed Richards and Hank Pym, he is opposed by a host of heroes, including his long-time Avengers teammate Captain America. The end result is Civil War.

As this iconic event progresses, Stark loses more and more allies, including Spider-Man. At one point, Danny Rand/Iron Fist, disguised as Daredevil, tosses a piece of silver at Tony's feet, telling him he now has 31 pieces, referencing the biblical tale of Judas Iscariot betraying Jesus Christ.

During the story's final battle, Cap succeeds in disabling Stark's armor, but later surrenders to avoid more casualties. Stark becomes the head of S.H.I.E.L.D. and arrests Cap, parading him around in public until his former teammate is shot and killed. Tony then realizes the error of his ways and admits to Cap's corpse that the war "wasn't worth it."

It would take some time for Marvel to redeem Tony's character in the eyes of fans after Civil War. Fortunately, a surprise hit movie in 2008 along with a critically and commercially acclaimed reboot of his series (by Matt Fraction and Salvador Larroca) did the trick and helped transform Stark into a loveable scoundrel again.