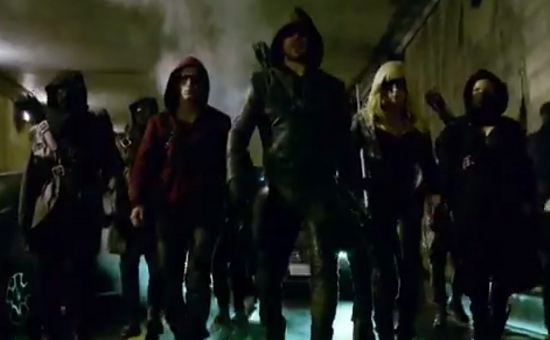 Of course, whether that means an entirely new character, or just the advent of a costume for someone like Thea (Speedy) or Roy (Arsenal) isn't clear.

The comments came after Amell was asked which members of the DC Universe he'd like to see appear on the show.

After saying that he'd like to see Ra's al Ghul on the series (a character whose name has been dropped numerous times and who many fans expect to see in Season Three), Amell said, "DC is a really good partner for us, and they're giving us access to characters that they wouldn't have even considered giving us in the first season and they wouldn't have given us in the second season. But I think we've proven ourselves. I think we've proven that we can present a worthy version of characters that people care a lot about, and so I would imagine that there would be no shortages of DC characters coming."

He added, "I do know also that very early on in Season Three, we see a new superhero suit."

At the close of Season Two, Roy Harper had donned his mask for the first time, but was still wearing just a red hoodie rather than a genuine costume. In that same episode, Oliver's sister Thea left with her biological father Malcolm Merlyn. During the same Q&A, Amell promised that she would be back.

"I don't think the question is whether she'll be a vilain but whether she'll be evil," he teased the audience, saying that the character had promised herself to learn never to be weak and that he expected to see that promise fulfilled.