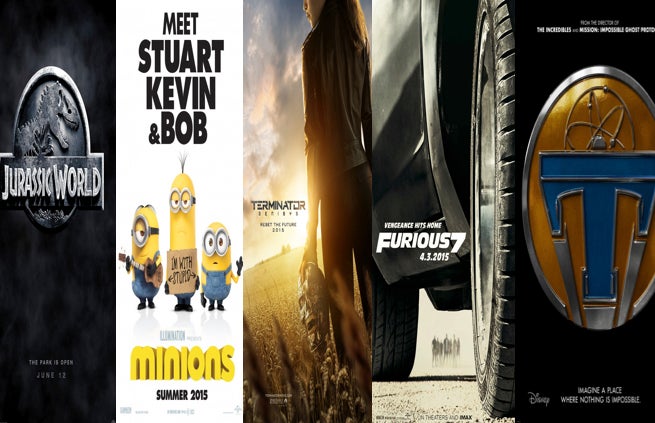 This Sunday may be the biggest day of the year for football fans, but it's also one of the most important for film buffs across the board. As the Patriots and Seahawks square off in Superbowl XLIX, Hollywood will unleash its largest single-day deluge of trailers for 2015. As of now, there are no less than 10 confirmed trailers to run during Sunday's match-up, giving fans of almost any movie genre something to look forward to.

That's a lot of trailers, not to mention feature films. However, every film on the list has has shown at least one trailer, which should properly prepare even the most casual moviegoers for Sunday night's onslaught. Below, we've compiled those previews into one handy list. Consider it the cinematic equivalent to a stats sheet, playbook, or whatever sports analogy fits best.

Furious 7 – Furious 7 will likely be the biggest installment in the Fast & Furious franchise yet. This film is stacked with stars who are popular with the football-viewing audience. Universal has a very strong film slate at the box office this year, and the fact that Furious 7 is one of their earlier big releases in the year makes it ideal for the Super Bowl. Furious 7 is scheduled to be released on April 3, 2015.

Minions – Universal has already been promoting the Minions like crazy. Despicable Me has become a huge franchise for the studio, and they will want to keep that going with Minions. In what is likely to be a Super Bowl dominated by action movie advertisements, the Minions could offer a good dose of comic relief. Minions is scheduled to be released in movie theaters on July 10.

Ted 2- The trailer for Seth MacFarlane's sequel just hit the Internet today, leaving a small promotional window between now and Sunday's game. This trailer will likely be same one that airs this weekend, but there's a possibility that a few new clips could appear on the Super Bowl. Ted 2 reunites Mark Wahlberg with his best friend and teddy bear, the foul-mouthed Ted. Ted 2 hits theaters on July 26.

The SpongeBob Movie: Sponge Out Of Water-Nickelodeon's second SpongeBob Squarepants movie takes the character into the world of live-action for the first time. With CGI renderings walking amongst real-life actors and settings, the sequel marks a big step for Nickelodeon's animation efforts. With a release date less than a week after the Super Bowl, it's likely that Nickelodeon will pack the film's best moments into the trailer. It opens on February 6th.

Kingsman: The Secret Service- The Matthew Vaughn-directed film brings another Mark Millar comic series to life in spectacularly British fashion. Both a romping action adventure and homage to the James Bond series, Kingsman tells the story of an aging secret agent who must train his ruffian nephew for the world's deadliest threats--including Samuel L. Jackson as an international terrorist. Numerous trailers for the film have already been released, so it's likely that Sunday's version will be a mix of plot overview and highlights. Kingsman: The Secret Service opens on February 13.

Insurgent-The Divergent series' next installment continues Tris and Four's battle against their opressive rulers in a dystopian future. Insurgent jumped the gun and released its second trailer today, so it's difficult to say if any new footage will air during the Super Bowl. Viewers may get a new clip or two, but what's featured above will most likely be it. Insurgent opens on March 20.

Terminator: Genisys-A reimagining of the Terminator Mythos, Genysis breathes new life into the franchise by revisiting what fans loved best about the series: Nike high tops, Kyle Reese, and of course, Arnold Schwarzenegger. In fact, the action star just posted a new sneak peak of Sunday's trailer on his Facebook page. Since Sunday's game will likely have tons of eighties movies fans watching, expect the spot to have tons of call-backs and references to the original Terminator film. Terminator: Genisys opens on July 1.

Seventh Son-An adaptation of the Joseph Delany novel, Seventh Son is an 18th-century fantasy film filled with dragons, knights, and all kinds of sorcery. Jeff Bridges does his best Obi-Wan impression as an aged warrior who must prepare an unlikely hero for an ensuing battle against the forces of darkness. The first trailer laid most of the film's card on the table, so Sunday's spot will likely focus on its biggest attractions: Dragons, Bridges, and an evil Julianne Moore.  Seventh Son hits theaters on February 6.

Tomorrowland - Disney's science fiction adventure takes George Clooney on an interdimensional romp through time and space with Britt Roberson. The first trailer was an enigmatic one, giving viewers more questions than answers. Hopefully, the official Super Bowl spot will play it less cryptically by including concrete details on the film's mysterious plot . Tomorrowland opens on May 22nd.

Which trailer are you the most excited to see during the Super Bowl? Sound off in the comments or message boards.