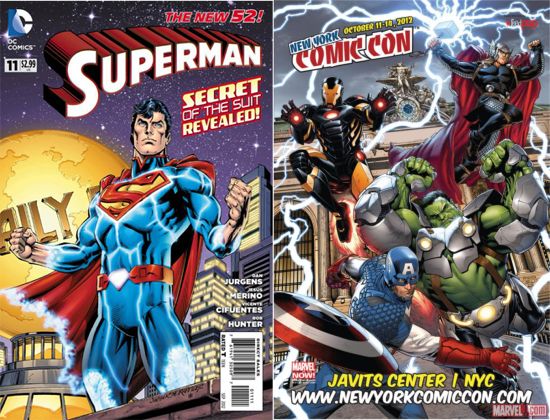 Whether it's inspired by the success of Iron Man at the cinema or just a crazy coincidence, the latest trend in comic book relaunches seems to be to take powerful characters and slap some armor on them. It first started with the New 52 when DC Comics premiered a new armored Superman costume with no red trunks. While the missing red trunks seemed to attract the most media attention, many in the comic book community had bigger issues with the question of why Superman would need armor. Now, Marvel Comics is joining the armor craze with their Marvel Now relaunch. The Hulk will now be sporting a partial armor suit, leading to similar questions from fans of why someone as powerful as the Hulk would need armor. If DC and Marvel were each going to choose a character to give armor costumes, then Superman and the Hulk would seem like the most unlikely choices on the surface. However, given that those two characters often find themselves in situations where they are in the middle of gigantic explosions, a case could be made for them needing pretty tough costumes in order to not constantly wind up naked. Beyond just the obvious modesty reasons, DC Comics has been building an entire storyline around the new Superman costume. The background of the suit is that it is a piece of Kryptonian armor, so it ties into Superman's history. They've even gotten some mileage out of gradually revealing the background of the suit with cover teasers like "Secret of the suit revealed." It also looks like Marvel Comics will be taking a similar angle with the Hulk. In an interview with Newsarama, Indestructible Hulk editor Mark Paniccia indicated that writer Mark Waid had a plan for rolling out the story of the armor. Apparently, the Hulk armor is something that was built with a deliberate purpose behind it. So what are your thoughts on the armor look for Superman and the Hulk? Is it an unnecessary and awkward costume addition for two powerful beings or does it make for a compelling new storyline?

Superman And Hulk: Why Do They Need Armor?