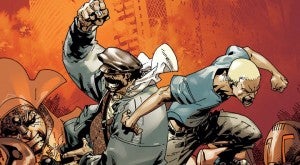 With the fourth issue out this week, Archer & Armstrong has nearly wrapped its first arc, and will soon go into the Eternal Warrior-centric storyline that will comprise the series's second trade paperback and will temporarily switch off artists to give Clayton Henry a break. In keeping with that, this month's issue begins with bits of the Boon being assembled--and as we discuss the series, Van Lente goes all Indiana Jones on us, holding court a little bit on the occult history of the Nazis and their real-world connection to Tibet that informs what's going on in-story and explains the whole "Nazi monk" thing, which (like the Nunjas from last time around) seems on the face of it to be a little contradictory. The issue was pretty action-driven, with not a lot of navel gazing, but quite a bit of Nazi monk fun -- so if the commentary is a bit shorter than usual, it's because it's harder for some people (although generally not for Van Lente) to riff on "boot to the head!" at length. Series writer Fred Van Lente joined us to talk about it, and now, before the next issue hits, we're going to let you read about it! First thing's first--how long until the Olympic Sumo Team dress up like Armstrong? I just pictured Armstrong's face on giant diapers. And it pleased me. So--is that monk on the first page actually Hitler? No, as he says, they're former members of the Ahnenerbe. This was the SS's "Ancestral Origins" division. The actual, historical Hitler didn't have much interest in the occult -- sorry, Indiana Jones fans -- but Himmler, who founded the SS, was another story entirely. He sent out archeological teams across Europe, Asia and Africa to prove loopy evolutionary theories about white people and their alleged superiority. One of the stranger intellectual traditions fueling Himmler was "Ariosophy," which held that Odin, Thor, and the rest of the Norse gods were historical figures who came form (no, I'm not making this up) Atlantis. The Aryan race left the sinking continent and made their way across India, cut through the Himalayas, and then ended up in Viking-Land. The 1938 SS expedition to Tibet was meant to drudge up some evidence to prove this (SPOILER ALERT: They didn't) but did inspire a bazillion conspiracy theories. Incidentally, Ariosophy was a racist corruption of Theosophy, a very popular mystical movement in the late 19th century -- you may have heard of its founder, Madame Blavatasky and her book The Secret Doctrine -- which is where the concept of an "akashic record" was popularized. Also, a reading recommendation. People who want to read more about the real Third Reich obsession with the supernatural should check out the scholarly (ie non-BS) The Occult Roots of Nazism by Nicholas Goodrick-Clarke. Armstrong gets a little touchier than usual when his Secret Origin is brought up, eh? As we learn, he has every reason to. In fact, one wonders if all his joviality and hedonism isn't a way to beat back all those screaming lifeforces rattling around inside him. How many secret military compounds are there in Nevada, anyway? I mean, some of them are pretty famous...! Read Bloodshot. 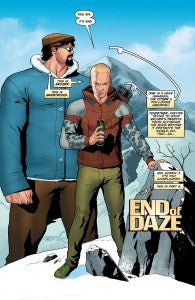 Is that "...and he's adopted?" a little Arrested Development moment going on? Suddenly Obie's on the market? Do you have a quota of pop culture references to get into these questions? ;) I would really compare it to Arrested Development since Obie already knew Mary-Maria was adopted, so it's not like there was a biological barrier to their attraction (vs. George Michael & Maeby). It really didn't take much for Obie's sweetheart to do an about face on the baddies here, did it? Obie said they were liars. She didn't believe him. They then proved he was right and she was wrong. She seems like a smart, reasonable person to me. Is it really smart for him to say Armstrong "may as well be the Antichrist" in front of all those kids he's been telling the dude IS the Antichrist? Seems like they might be miffed. At that point they've gotten what they wanted all along, so they're being a little loose-lipped. With the secret of his immortality revealed, it surely makes sense why both Armstrong and the Eternal Warrior do what they do--they just have their own coping mechanisms. I think that's a great way of looking at it, yeah. You might even say Eternal Warrior is "always angry." Ivar, likewise, is always searching -- questing. Is it safe to assume Mary-Maria is the successor to the Geomancer who died? It's not safe to assume anything.

The Antichrist and the Occult Roots of Nazism: Fred Van Lente on Archer & Armstrong #4