With the passing earlier today of hairstyling legend Vidal Sassoon, it got us to thinking about the chances that people take with their hair and how sometimes...well, sometimes those risks don't pan out so well for them. That's as true in comics as anywhere else, and in honor of the late Mr. Sassoon, we figured it was as good a time as any to look back on some of comics' worst hairstyles. 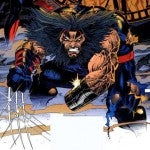 Yes, it's iconic, and some artists can make it look cool. But there's a reason Hugh Jackman's onscreen bouffant bears only a passing resemblance to Wolverine's look in the comics. 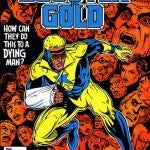 About halfway through his first volume, Booster Gold changed his haircut. Designed in-story as an attempt to appeal to a broader demographic, he got a shorter, more military-style haircut which, along with a cast on one arm, defined the character's look during a period in his history.

The whole "appeals to a broader demographic" thing, though? Not so much. After receiving a number of letters from readers critical of the change, DC asked fans through the series' letter column whether or not the new look should stay. Not long after that, Booster's original hairstyle was quietly reinstated and has remained largely unchanged since. 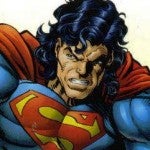 You know that old story about how your hair and nails continue to grow after death? Well, Superman's passing carried with it a touch of that--but only a touch.

When four heroes turned up claiming to be the resurrected or reincarnated Superman, three of the four kept the Man of Steel's iconic spit-curl (Steel, of course, was bald), but it was when the real Superman emerged from a Kryptonian healing chamber a few months later that the real controversy began. 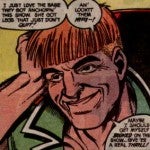 This one has its supporters among fanboys who like their heroes to stay consistent--and it's of course debatable whether this is really worse than the gargantuan mane of hair he had for a while during the Guy Gardner: Warrior series.

Still, this was a look that came into being when it was trendy for a minute and far, far outlived the trend that spawned it. 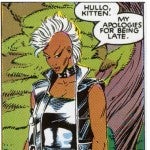 No. Just...no. Someone could perceivably have a worse hairstyle in comics, but it would be a...Longshot.