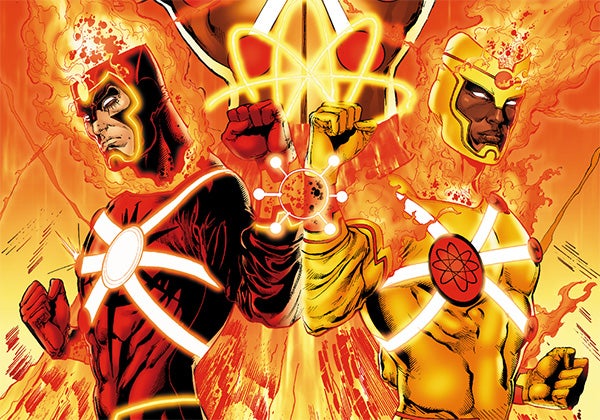 Jason Rusch, one half of the Firestorm matrix in more recent comic book adaptations of the character (including the one currently appearing in The New 52: Futures End), is coming to THe CW's The Flash, KSite TV reports.

They've got the following, official description of the character:

A graduate student at Hudson University, he was part of Martin Stein's research team on the F.I.R.E.S.T.O.R.M. project. In the DC comics, Jason takes over the Firestorm matrix after Ronnie Raymond's death.

In the current comics, Raymond and Rusch share the Firestorm body, while in the past it was one of the two with Professor Stein. No clue on what combination, if any, will be in the TV series, where actor Robbie Amell had previously stated that Firestorm will arrive soon and that Ronnie will struggle to remember his non-Firestorm identity.

In the comics, Rusch and Ronnie have a somewhat adversarial relationship, with Jason treating Ronnie like a dumb jock and Ronnie unhappy sharing his time to be Firestorm.

Luc Roderique, the actor playing Rusch, has been included on the episode listings for The Flash's upcoming tenth outing for a while now on IMDb...but since that site is user-edited and often incorrect, we hadn't run with the information. A previous inquiry to The CW about Roderique by ComicBook.com yielded no comment.

Roderique has also starred in the Supernatural episode "Blood Brother," the recent, Gareth Edwards-directed Godzilla and the pilot episode of iZombie, coming to The CW in January.

All of this also begs the question: What is the F.I.R.E.S.T.O.R.M. project -- and what the hell does that stand for?