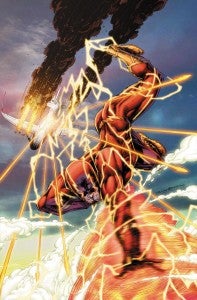 Following the announcement that Geoff Johns is leaving Aquaman yesterday, it didn't make quite as many headlines that Brian Buccellato and Francis Manapul, who replaced him on The Flash, also moved on--reportedly to take a new DC series that hasn't yet been announced. Last night, the creators took to social media and Buccellato's website to explain the move, ensuring fans that they're going to get to finish what they started and that it was just time to move on and try new things. "Francis and I will be moving on to a NEW regular DC series that will hit stores in MARCH 2014. We can't tell you what the series is (yet), but we are super excited about this new sandbox we get to play in!" Wrote Buccellato. "We love Barry… We'll miss Barry… and we look forward to seeing what the future has in store for him. But this isn't goodbye. Not YET. Because of the way solicitations work, we have to announce this now… but don't forget to pick up issue our Villains Month Books, and #24 and #25! Francis and I still have some story to tell before we hand Barry off…" The new creative team for the long term has yet to be announced. CBR reports that the story in December's #26 will be a one-shot tale from writer Christos Gage and artist Neil Googe. The pair have worked together previously on Wildstorm's WildC.A.T.S. series. The publisher may be looking for an A-list team to announce at New York Comic Con since The Flash will appear on The CW's Arrow later this year, and will ultimately get his own pilot in 2014 with an eye toward a TV series for the Fastest Man Alive.