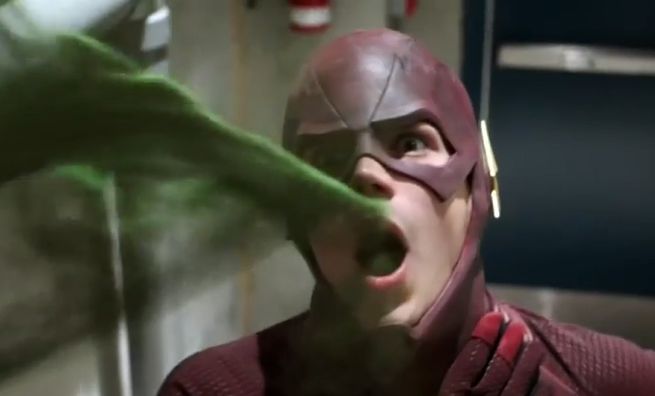 The episode opens with Barry and Iris leaving a theater; on the sign is a double feature for Blue Devil II and The Rita Farr Story, but whatever they saw was apparently a zombie movie, as that's what Barry is comparing it to.

First Thawne calls for Iris, then Cisco for Barry. While Iris is distracted talking to her boyfriend, Barry slips off to where the police are chasing someone following an armed robbery, pulls them out of their car, puts them in the back of the police car, and rushes back to Iris's side. He asks if she wants to get food, since he's starving.

The Darbinian crime family is meeting at a restaurant called Amarasian Oasis, where they find themselves surrounded by gas and killed one by one after one. 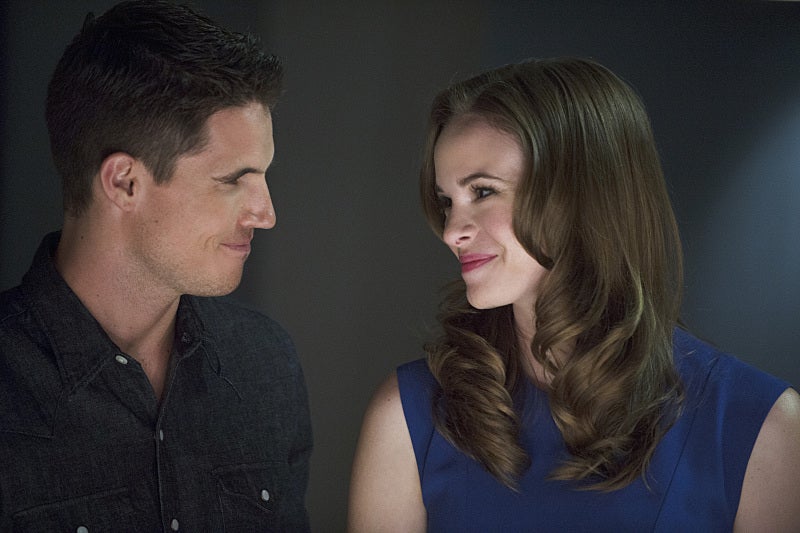 Barry joins Joe at the police department; Joe has brought all the old casefiles from Barry's father's murder trial to Barry's lab, saying he plans to help him exonerate his dad. Thawne comes in to tell the pair about the Darbinian massacre.

At the restaurant, they figure out that the poison would have had to be inside the building since the doors are latched from the inside. Barry realizes that it looks like various victims got more or less far away from the table than others, suggesting that perhaps they were being attacked one by one and the gas was being directed rather than dispersed.

At S.T.A.R., Barry discusses theories as to how the killer might operate with the team. Joe says he doesn't care how it "works," he just cares about putting the bad guys in jail...but a jail won't hold this guy. He asks the team to think of a better solution, and Cisco suggests that they could restructure parts of the particle accelerator to serve as a prison.

Caitlin starts thinking about it, flashing back to the night the accelerator was turned on. She and Ronnie are making honeymoon plans, and the mood is generally celebratory. Wells turns on the particle accelerator and, after popping a bottle of champagne, the stream is suspended in the air briefly, splashes down, and there's a loud bang.

Wells snaps her out of her thoughts, asking her to come to the particle accelerator with him and Cisco, but Barry sees she's uncomfortable and asks to take her back to the police station to help with the investigation.

At the department, everyone is crappy to Barry, who has to use Caitlin for cover so that he can use his powers to sneak up to his lab and complete a report at super speed for Singh.

Back at his home, Joe is watching the old video of Henry's interrogation, with Henry telling the arresting officer that Joe would vouch for him -- that he's not a killer. Iris comes in and he closes the laptop quickly, explaining only that it's "work stuff." Thawne shows up, obviously for Iris, but has to cover himself and tell Joe that he's looking for him so they can re-sweep the restaurant crime scene. On the way out, he tells Iris that they have to tell her father about their relationship. 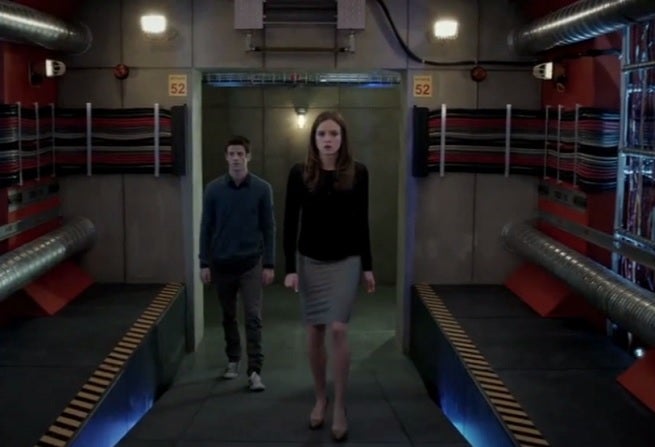 Down in the belly of the particle accelerator, Cisco begins to flash back to the night of the accident as well; he and Ronnie Raymond had gone down into the machine when the alarms started to go off, in the hopes of stopping the explosion and saving the lives of everyone in the building. Ronnie told Cisco to close the shielded doors and save the others if Ronnie wasn't back in two minutes, which Cisco grudgingly agreed to do only after Ronnie told him that saving Caitlin was more important.

Wells calls Cisco out of his flashback, and offers a shoulder if he needs to talk, but Cisco redirects, talking instead about the technical specifications of the changes they'll need to make.

At the crime lab, Caitlin and Barry talk about Ronnie -- they were like fire and ice, and he made her laugh, she says. He was only there that night to be with her; he wasn't supposed to be working.

They find a second strand of DNA inside the lungs of one of the victims, indicating that the metahuman they're chasing can't just control gas, but can actually become it. the DNA doesn't come up in any database.

At a mall, the killer attacks a judge in an elevator, implying that she had given him the death penalty.

When word comes over the radio that there's a gas attack in progress, Barry suits up and rushes to the mall to try and help. The judge is already dead when he arrives but he sees a cloud of gas, and rushes off to confront the killer. When the killer is unrepentant and says there's one more name on his list, Barry tries to punch him, but the killer becomes intangible, then knocks Barry around a little and tries to poison him, too.

In spite of almost dying, Barry's super-fast metabolism saves him and he rushes to S.T.A.R. -- the gas in his lungs constitutes a live sample of what's going on, so they have to remove it with a syringe.

When he wakes up, they start to analyze it. Cisco names the villain "The Mist," and Barry leaves to talk to Joe, explaining that the killer can transform into gas, not just control it. He feels guilty for not saving the judge, and likens the guilt to having been unable to help his parents as a kid. He says that he could break Henry out of the prison as The Flash, but Joe notes that they'd just spend their lives on the run, and promises Barry that he's going to get his dad out the right way. He tells Barry that you can't avoid pain and you can't save everyone.

At the police department, Thawne is fielding calls reporting a "red streak" at the gas attack site when Iris shows up to talk to him. She tells him that she's going to come clean to her dad -- that the only thing stopping her had been that telling Joe will make the relationship "real."

Barry goes to Caitlin and they commiserate about Ronnie and Nora. He offers to go into the hole with her so that she doesn't have to face it alone.

She flashes back to the moment when Ronnie was lost; Cisco closes the door and when she comes to get Ronnie, it's too late. Ronnie calls on a walkie-talkie, saying that he's redirected the vents so that the explosion should go up instead of out, sparing the people in the building. She tells Barry that she's upset nobody will ever know what he did, and Barry tells her that he knows, and that Ronnie died a hero.

"I didn't want him to be a hero. I wanted him to be my husband," she says.

At the lab, Barry figures out that the chemical complex in the poison gas is the same as they give death penalty prisoners, leading them to realize that Kyle Nimbus had been affected by the particle accelerator blast as he was being executed. They figure out his connections to the crime family and the judge and deduce that the next victim will be the arresting officer -- Joe.

Before he rushes out, Caitlin gives him a vial of antidote in case he needs it.

Joe is at Iron Heights visiting Henry, telling him how sorry he is and that he knows Henry is innocent. Henry is steely but says that it doesn't matter Joe never believed in him, becuase he (Joe) always believed in Barry.

Barry calls Eddie, who directs him to Iron Heights. Barry arrives just after The Mist has attacked the guard and Joe, leaving both down. Barry saves Joe (who had been attacked second and was still save-able) with the antidote, vibrating his face the whole time so that Henry can't see his features and identify him.

Outside, he confronts Nimbus but over the comms, they remind him that without the antidote, he cant breathe in any of the mist. They suggest Barry make Nimbus chase him -- that continuous use of his powers will exhaust him. Eventually it works and when Nimbus re-forms to take a breath, Barry punches him out.

At the hospital, Joe wakes up to see Barry dozing in a chair beside him. They talk for a few moments before Iris comes in with Thawne. She starts to confess they've been dating, but Joe tells them he knows; he's a detective, and they're terrible liars.

He tells her that he's mad, but that he wants her to be happy and will "do my best not to shoot him."

In the particle accelerator's Area 52, The Mist pounds ineffectually against his cell walls. Caitlin isn't comfortable with working upstairs from a metahuman prison, but Wells tells her she'll get used to it. Cisco starts to tell her something about the night of the accident, but Caitlin cuts him off, saying that she's okay, that she loves Ronnie even more remembering what he sacrificed and that she wants ice cream and/or a drink.

Barry goes to see Henry, and they talk about Nora. Henry says that Barry was slow to walk -- and that when he eventually did, it was to run straight into his mother's arms.

Barry speeds through the city; he saves a purse-snatching victim, we see Iris blogging about the "streak," we see Caitlin and Cisco laughing. Back at S.T.A.R., Wells stares at the Flash costume and then has a flashback to the night of the accident of his own.

After getting the message from Cisco that Ronnie has saved them, Wells says he'll be right down. He enters his secret chamber and pulls up a surveillance video of Barry being struck by the lightning, and says, "See you soon, Barry."

The Flash Recap With Spoilers: Things You Can't Outrun