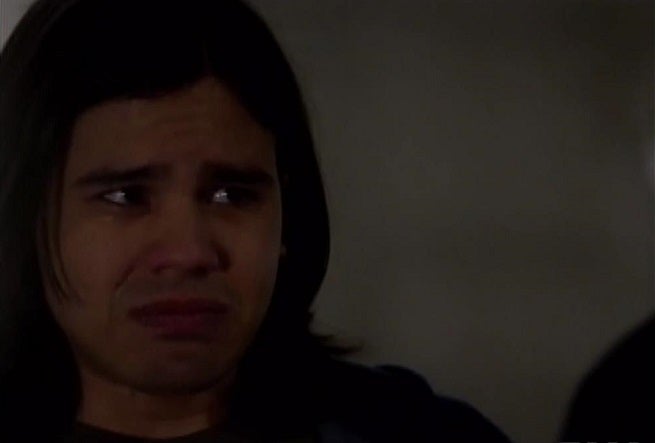 Warning: Spoilers ahead for tonight's episode of the CW's The Flash, titled "Out of Time."

Following his death on tonight's episode of The Flash...Cisco Ramon appears in the preview for next week's episode. And a large group of fans can breathe a sigh of relief.

"Certain events occur that prevent Cisco from following along this same trajectory," Kreisberg told a group of reporters. "So, watching how thing splay out but in a totally different way."

That sounds like he's protected for now -- but what does Harrison Wells, now revealed as Eobard Thawne, think about what he needed to do...even if it didn't take?

"Wells killed a dead guy," said Cavanagh, echoing what his character said tonight. "It's not a big deal. But, there's a genuine affection between them. That is not fake. In the current time, Thawne is truly invested, truly cares about Cisco, and is truly impressed by him. When we saw the two of them meet, he was on his side. From the moment, he knew this guy had a spark. Wells/Thawne is smart enough to go, 'This guy has it,' and he's smart enough to bring him on board because he's truly a wunderkind. He's a genius. He seems some of himself in Cisco. There's a protégé/mentorship thing happening. There's genuine affection when he says, 'You've shown me what it's like to have a son,' he's not saying it idly. He means it. At the same time, the guy has gotta get home."

He added that, if the question of killing Barry or getting home were a choice to make, his greatest hope is getting home. That said...did Wells realize that he was killing someone who should turn out to be Vibe, a member of the Justice League?

"There's a great line in Episode 22, that speaks to that," Kreisberg admitted. "Wells begins to impart some tidbits about a certain character's future possibilities."

"In the scene between Tom and Carlos [Valdes], we didn't even script that he cries. The minute Dr. Wells walks into the room and Cisco knows he's gonna die, I just get chills even thinking about it, and it wasn't even something that we intended," Kreisberg said. "It's what they brought to it. It really is this massive collaboration between everybody, and that isn't always the case. We're so proud of the scripts, but then we get these dailies back and we're even more blown away."

The Flash: What is Cisco's Fate?