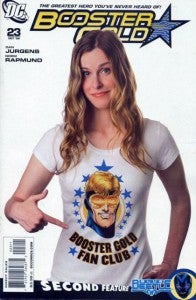 Blair Butler (of G4's Attack of the Show) is, according to her website, a comedian. She's also, according to DC Comics' The Source blog, "Booster Gold's #1 fan." And as of next month, she's a DC Comics cover girl. This weekend at San Diego, copies of the t-shirt worn by Butler will be available to fans at San Diego and while I challenge the claim that she's the book's #1 fan (raise your hand if you've been doing a monthly column dedicated to commentary on the comic for almost two years), I tracked down Booster Gold writer/artist Dan Jurgens to talk about the finally-revealed cover to next month's issue. Why Butler? A number of fans asked in the comments section of the blog post that revealed this cover to those of us outside San Diego. "Why not?" Dan Jurgens asked back. "She's a fan who has fans and that's a good combo that makes for a great and unique cover!" In terms of how-and if-Butler plays into the ongoing story of Booster and the Teen Titans fighting the Black Beetle in the 1980s, Jurgens answered that Butler's station as Booster's #1 fan plays "a slight role" in Booster Gold #23, but that readers would have to pick up the book to see what that role was. While Butler's involvement in #23 may remain a mystery for now, Ted Kord's role in Blackest Night was spilled at yesterday's Blackest Night panel by writer Geoff Johns. 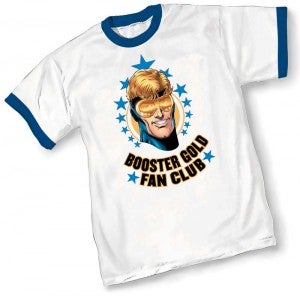 According to Johns, Black Lantern Ted Kord would spend two issues facing off against Booster. Jurgens explained that he wrote Booster Gold #26 and #27 while "kibbitzing" with Johns, and so while it's true the superstar writer who helped relaunch the series didn't return for co-writing duties, he did bounce some ideas off Jurgens for the story. So far, we couldn't get him to spill whether a Black Lantern Ted Kord meant a major change for the long-teased "plans" that Jurgens, Katz and Johns had developed for Ted at the end of Booster Gold #12, or whether having a Kord corpse was something that would just require a clever workaround later by the writer.