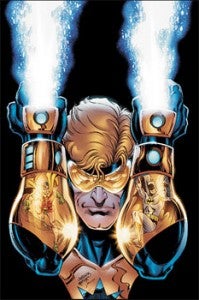 With the release of Booster Gold #11 this week, the Booster Gold writing team of Geoff Johns and Jeff Katz is officially off the title, replaced by a pair of interim creative teams until such time as the full-time scribe is announced. (Soon, really!)

This month's guest-writer, who is doing a two-part arc revolving around an obscure Batman villain he created in the '90s, is Chuck Dixon-the man who was to Batman in the 1990s what Booster Gold creator and series artist Dan Jurgens was to Superman. He helped to set the tone for the four monthly series and was possibly the most beloved of the various writers by the character's fans. Wrapping up some of his final projects for DC, Dixon was kind enough to join our roundtable for the next few months and discuss Booster Gold #11 and the stories that originated Wiley Dalbert-Detective Comics #714 and #715.

So, whose idea was it to revisit the story of Wiley Dalbert?

Dan Jurgens: That was all Chuck's. We mentioned the general idea of a story with Booster traveling back to the relatively early days of Batman and Robin, while setting us up later for a story to move farther back and he immediately came up with the idea of using Wiley Dalbert.

Chuck Dixon: Basically, I thought, "Why not?" Dan Jurgens and Mike Siglain wanted me to feature Batman in the arc. It seemed natural to re-visit my one and only Batman time-travelling story.

Where in the future did he get that suit? Did he steal it from the supervillain wing of Booster's museum? I can't imagine anyone this side of the Toyman thinking that looked good...!

CD: Well, I assumed that he was thinking of how he would dress for the 1870s. That was always Wiley's ultimate destination. I might not have worn the pink shirt though.

DJ: You know how criminal geniuses are! They might be smart, but style masters they are not!

Am I to assume that there's someone bigger than Dalbert pulling the strings here? Or did Batman and Robin just catch him because it's like a New Earth thing?

CD: This story will absolutely have ramifications beyond this arc. Though what they are is unknown to me. I was asked to set up stuff that will be paid off later.

DJ: It's safe to assume that you'll eventually see another personality involved in some of this though "pulling the strings" might be a bit too strong.

Dalbert seems to have a real tendency to pick losers to be his partners (Firefly and Killer Moth)....Is this a conscious decision to avoid impacting history too much?

CD: Well, he needs the more malleable villains. Guys who will change their plans at the last minute if they think they're being handed an edge. He picked these guys because they're second stringers. 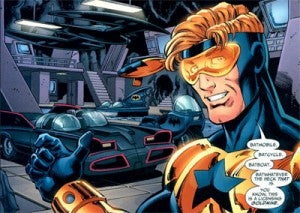 DJ: You're calling Killer Moth a loser? How can you say that? How can you be so dismissive, so utterly blind to his true potential?

Doesn't the idea of Batman stopping this guy and then this guy's absence making it so that Batman never existed, kind of throw you into a paradox?

DJ: Time travel stories often present a paradox. Fortunately, Booster is the kind of guy who doesn't think about that too much.

Or unfortunately. Depends on how you look at it.

CD: That's what this book is all about, McFly! To me, no time travel story is complete without a wicked tangle of brain-busting paradoxes.

I like the excitement that Booster has about dressing up to be Batman next issue...although it's kind of a shame that the tease at the end of #1,000,000 seems to have blown the joke on the cover. Are we going to see Skeets in little green pixie boots?

CD: You're gonna have to wait for that. Nothing goes the way you'd anticipate. That's the fun of this title.

DJ: Simply put, Skeets finds the little green pixie boots to be a needless fashion accessory. However, lots of fringes, such as those that the TV version of Batgirl had on her batcycle would work perfectly. 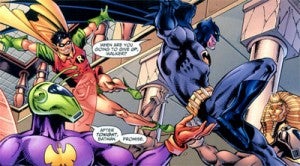 Man, there's a lot of old Egyptian artifacts coming into play in this book. Dan, are we going to see Black Adam in here sometime soon?

So Chuck has way more experience with Batman than I do...when have we seen Alfred as a gun-toter? Wouldn't that have been useful back in Batman #497?

DJ: Believe it or not, I asked Chuck this very same question! And his answer was--, Chuck? Care to chip in here?

CD: Alfred's whipped out his trusty scattergun a few times during my run. Most notably, he blasted a predator in Batman/Predator III.