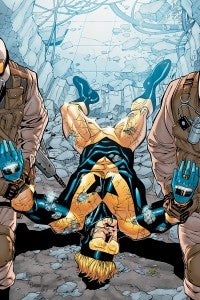 The last time we spoke with J.M. DeMatteis, nobody knew that he would be leaving Booster Gold with May's #44, when series creator Dan Jurgens takes over again and Flashpoint takes over the DC Universe.

Since then, the announcement has been made and the comic has been delayed; it's been an interesting month to be following the editorial movements of Booster Gold. DeMatteis talked a little bit about his run last night on the first episode of Panel Discussions, and afterwards we continued that conversation to talk about last week's Booster Gold #41, Booster's prison sentence and the introduction of his cellmate/nemesis, The Perforated Man.

The Gold Exchange: Last month, you were very excited about the introduction of The Perforated Man. While you told Panel Discussions that his identity will be revealed next issue, is there anything else you can tell readers to kind of sell them on the notion that this is the Booster Gold villain we're hoping he is?

J.M. DeMatteis: That's a tall order! To me it's a really wonderful concept—Keith came up with the concept and as soon as he told me, I said “That's fantastic. It's just the guy we've been waiting for.” As you know, people tend to type us as “bwa-ha-hah” but we go back and forth. We do funny stuff, but that doesn't mean that there's not serious character development going on, or that we can't turn on a dime into tragedy. This character turned everything to the dark for a little while. In the next issue, you'll find some jokes floating around but it's an intensely serious story. It gets very big and very cosmic and very emotional and it allowed us to go in a different direction from what we've done up till now. So for me, just the variation in this story has been great fun. We always like to change things up and this was an opportunity to really shift the tone of the book. Plus, I always like it when you can get cosmic. I'm a big fan of cosmic.

GX: Do you think that because of Booster's prison scrubs having a holo feature built into them and all that, it means you can get away with introducing a supervillain who, despite being in jail, still looks like a supervillain?

JMD: I address that in the next issue in a funny, sort-of off-handed way...but it's definitely addressed. It certainly occurred to us as well.

GX: The thing is, you can't have the big dramatic reveal of your major villain be that he's some guy with brown hair and has to walk past Booster to use the john.

JMD: Right. As I said, we do address it, although we address it in a way that maybe people will find a little—nah, maybe they'll just laugh at it. I was writing and I said, “Hmmm...he's in this oddball outfit. Well, okay, this is what we'll do.”

GX: With the idea of Booster planning to serve a five-year prison sentence, would he just return to the present at exactly the moment he left, so as to cause as little disruption for Rani as possible? Not, I should point out, that I expect him to serve the full term. As usually happens with superheroes I figure there's a good chance something will go horribly wrong and eventually he'll be out in a month.

JMD: I'll say this much: he does serve his five years, so you'll see how he handled it. In many ways, it seems like he serves far more than five years as the story unfolds, and that's all I'm going to say about that. There's some really interesting stuff in the next issue and I don't want to blow it for anybody...but I will say that he serves his five years and leave it at that.

GX: That's interesting, because so much of the market right now is being driven by trade paperback sales, and that seems like a story—sequestered from the DC Universe and his supporting cast for five years—that's just tailor-made for the trade market.

JMD: Right. Well, we had to aim toward finishing the book up. This could have been a much bigger story in terms of the time we spent on it and the pages we spent on it, than it was. So the difficulty from the writing end was attempting a really massive story in a very little bit of time. And you'll see it right away from the next issue. The next issue could have played out over twelve issues had we had the space and the time. That's not what we were talking about, but it easily could have for reasons that will be obvious when you read the story.

GX: Is all of this why the solicitation text a couple of months ago said “...and it's clear that Booster won't be traveling through time again anytime soon” or something like that?

JMD: I saw that and I have no idea what that is! It may have been a discussion between Keith and Carlin about the plot or a story element that may then have been tossed aside. Maybe they were referring to him being in prison—but even there, he was going into the future to go to prison. Sometimes, to be honest, we have to get the solicitation out there and the plot isn't in yet so they have to put it together from what was perhaps a vague discussion. If there was a discussion at all! We all just do the best we can based on the information that we have.

GX: Solicitations are a funny animal. There was an issue of Booster that was solicited a while back with a Kevin Maguire cover with Booster flying away from an explosion carrying a beautiful woman, that never ended up on an actual comic book. It fell during the Justice League arc, and the solicitation was something like “Will he save his friends and stop Max Lord, or flirt with this chick?”.

JMD: Wow, I have no idea where that came from! Well there you go--the covers have to be done even earlier than the solicitation text, especially when you have someone like Kevin who likes to take his time. So they probably had him do that way ahead of time and then by the time the cover was ready there was just no story to match it to. That sounds like such a great illustration, though, that they just should have used it anyway as a poster shot. I'm sure they'll find someplace for it.

GX: Did you know when this issue--#41--was written that you had a ticking clock on the book, or no? It seems like the story of the Nazi siege on Rip Hunter's base is resolved fairly abruptly.

JMD: Now that you say that, I think you're right. I think I remember having a conversation with [editor Mike] Carlin about this story and having to wrap that up and move on. I can't swear to it, but it's very possible that we did wrap that up quickly to move on to the next thing.

GX: It was a really big issue for Rani, between the PTSD element of her story and the emotional bond on display between her and Booster. Will we see more of that in the next arc?

JMD: The next issue is pretty focused on Booster. We see a little bit of Rani here and there but we really didn't have the time to do anything major with her beyond a couple of little emotional beats that you'll see. We'll see how she plays out in the final issue, because as I said [in this week's Panel Discussions podcast] a lot of this hinges upon whether Keith and I can get away with the ending that we've been talking about.

GX: It's always interesting to come back to points like that later and see whether they were allowed. I've talked to other creators whose books have been canceled and when you hear about the stories they have planned, you say “Damn that was great! How didn't that fly?” With you guys it's a little different because it's not a sales issue—you're being moved off the title as a result of the event cycle.

JMD: Yeah. Which unfortunately is what's driving the industry right now, or at least Marvel and DC. From a business point-of-view I completely understand why they do it. From a creative point-of-view I loathe it.

GX: One dangling thing—and the answer is probably that we have no idea—but where did Nishtikeit go? Will we be seeing him again?

JMD: Not in our last three issues, no. If Dan wants to pluck him away and do something with him, he's more than welcome. Nishtikeit was not intended to be one of the major villains of all time. For us, he was just a fun antagonist—but there certainly is room for development and there's room to play with him. One of the great things to do with characters like that is that each time you bring them back you kind of evolve them a step forward and then you evolve them again until they become something very different from what they started out as. The fact that he was a Nazi wasn't as important, for example, as the fact that he's another man out of time.

GX: ...And really, he'd already kind of eschewed the Nazi thing by the time he reappeared here in Arizona.

JMD: Yeah, exactly. He's like, “Hitler screwed it up; who cares about the Fourth Reich? I've got my own agenda here.” I even laid in a couple of lines that suggested he was up to something else...something bigger...in case we were going to bring him back. Of course, that was before I found out that we weren't going to be bringing anybody back!

GX: And how does that kind of thing affect the really ambitious way that you guys had looked at The Perforated Man?

JMD: We'll see what happens. A lot depends on what we do in our last issue. As I said, our plan was to make him a major player who could be the Doctor Doom to Booster's Fantastic Four. Our plan right now is to really sort of wrap the character up a bit more because from what I hear, Dan has a whole lot of other things that he's going to be focusing on and he doesn't really need this character. Still, given the nature of a time-travel book where yesterday, today and tomorrow all fold up into each other, the character could easily come back if Dan wants to use him at any point.

GX: With the credits this month, was the “A Dan Jurgens Production” at the top kind of a tongue-in-cheek reference to the fact that you found out during the creation of this issue that he was returning to the title in May?

JMD: Oh, yeah. We knew that Dan was coming back, and this is Dan's character, so a little credit foreshadowing is exactly what it was.