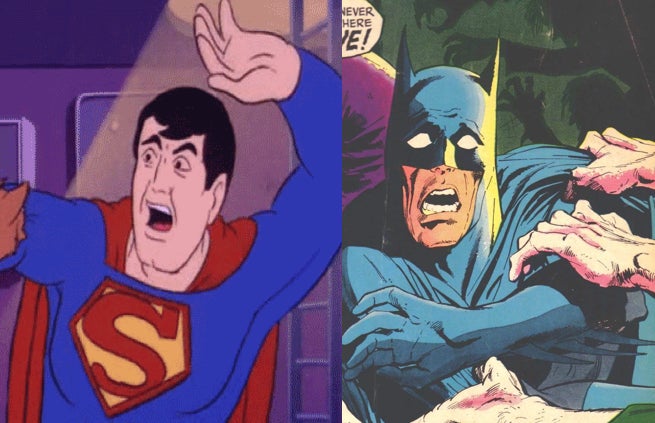 Comics and Halloween go together like the peanut butter and chocolate candies in your trick or treat bag. The villains—and even some heroes—in the pages of comics are already the stuff of nightmares (minus Crazy Quilt), making for seamless transitions into the horror realm. In fact, it's arguable that the most terrifying comic book stories could put a large chunk of horror films to shame. With that in mind, we run down the five moment sin comic book history that would make even make Wes Craven shudder. 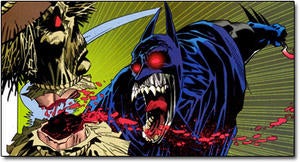 Batman has taken many a life throughout DC's various Elseworlds tales, but Batman: Crimson Mist takes the blood-soaked cake for delivering the most gruesome massacres. After succumbing to his predatory urges—on the Joker, no less—Batman transforms into a true monster of the night. Aiming his hunger towards Gotham's criminal element, Batman chomps through his rogues gallery like an all-you-can-eat buffer. But merely draining their blood isn't enough. This Dark, Dark Knight also decapitates them in sadistic fashion, then places their severed heads on the pikes of Arkham Asylum. If the concept weren't chilling enough, Kelly Jones brings the nightmare to life in horrific fashion. His grotesque linework sears every brutal scene into your head, and the moody shadowing makes every other moment just as uncomfortable. It's an unforgettable comics experience—for all wrong reasons. 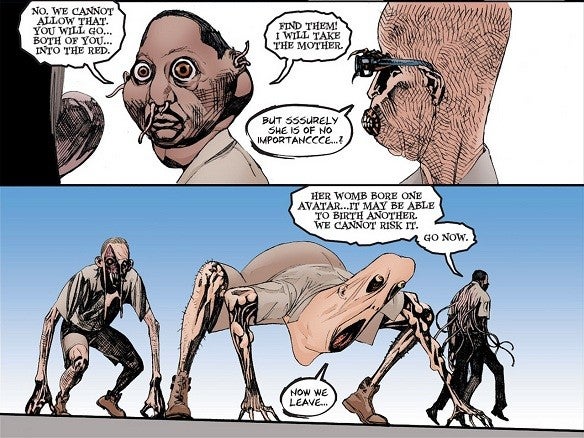 Jeff Lemire and Steve Pugh's opening arc in "Animal Man" may be the New 52's most unnerving work yet. When parasitic monsters known as The Rot target Buddy Baker and his connection to The Red, they invade his world in gut-churning fashion. By possessing a string of human hosts, the Rot pursues the Baker family across the country with an enduring determination that would impress Jason Voorhees. Just when the family thinks they're safe, they realize that they're far from it. But it's Steve Pugh's depictions on The Rot that really make this a disturbing comic. They're putrid. They're grotesque. They contort and corrupt their hosts into forms that humans should never take. It's The Fly with a comic book twist. And Lemire matches that imagery with equally-unsettling dialogue. If there's one thing that's worse than a demonic parasite, it's one that revels in its stomach-churning activities. 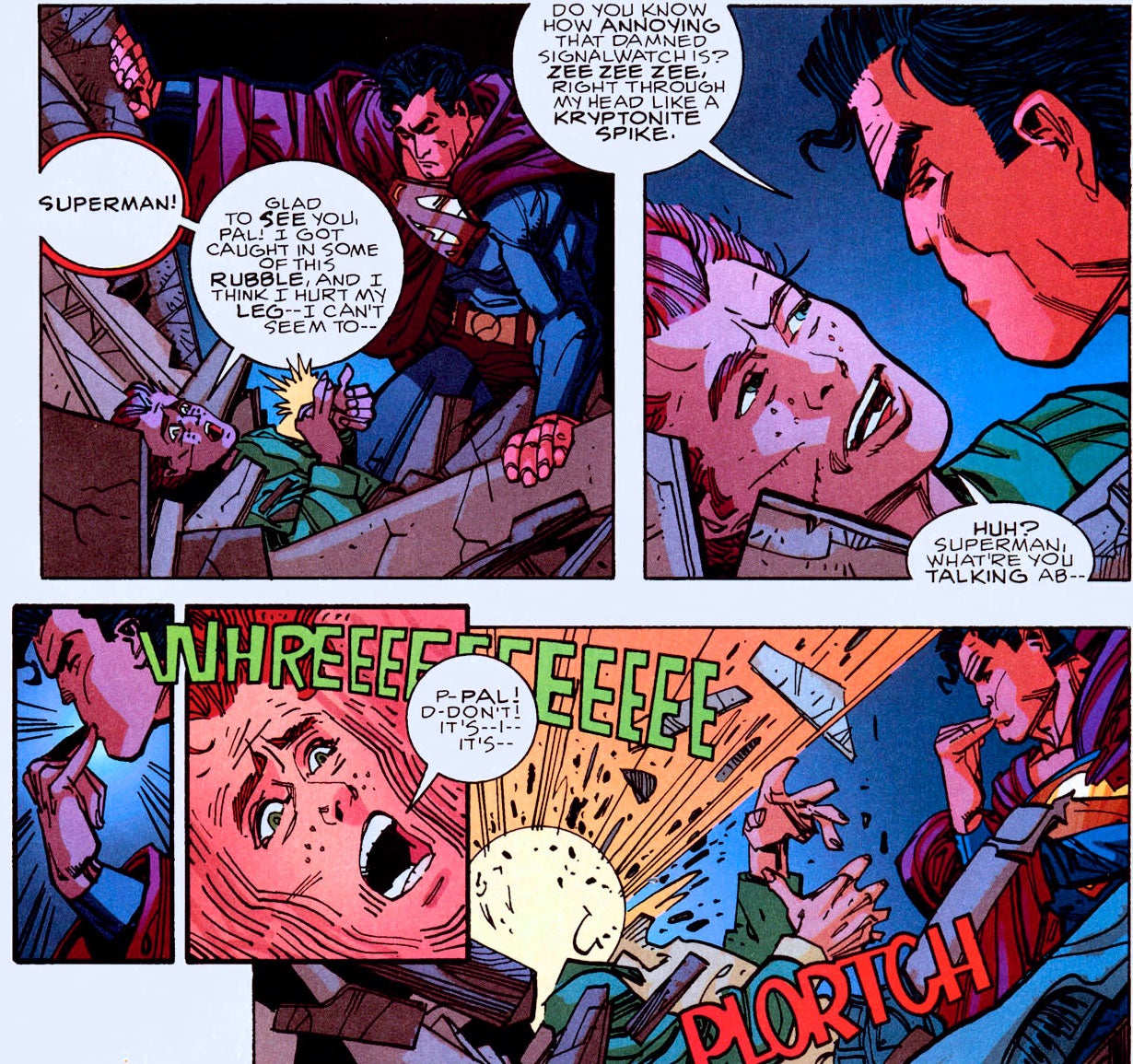 One of the more memorable tales from Kurt Busiek's post-"Infinite Crisis" run on Superman was his standalone adventure through the depths of Krypton's Hell. Taking the concept of a #666 issue and running full-force with it, Busiek chronicles a damned Man of Steel who's possessed by an ancient Kryptonian demon, Rakkar. His soul corrupted by Rakkar, the hedonistic Superman goes an a killing spree before declaring himself the Dark Prince of the Earth. But even that isn't enough for the demonic Kal-El. Ripping open the dimension to Hell, Superman dethrones the Devil himself. And it's all in-continuity (pre New 52 that is), so how the heck does Superman get out of this one? This title wins by through creeping readers out without resorting to gruesome imagery. And speaking of, Walt Simonsson illustrates this entire tale, making it bombastic as it is bone-chilling. 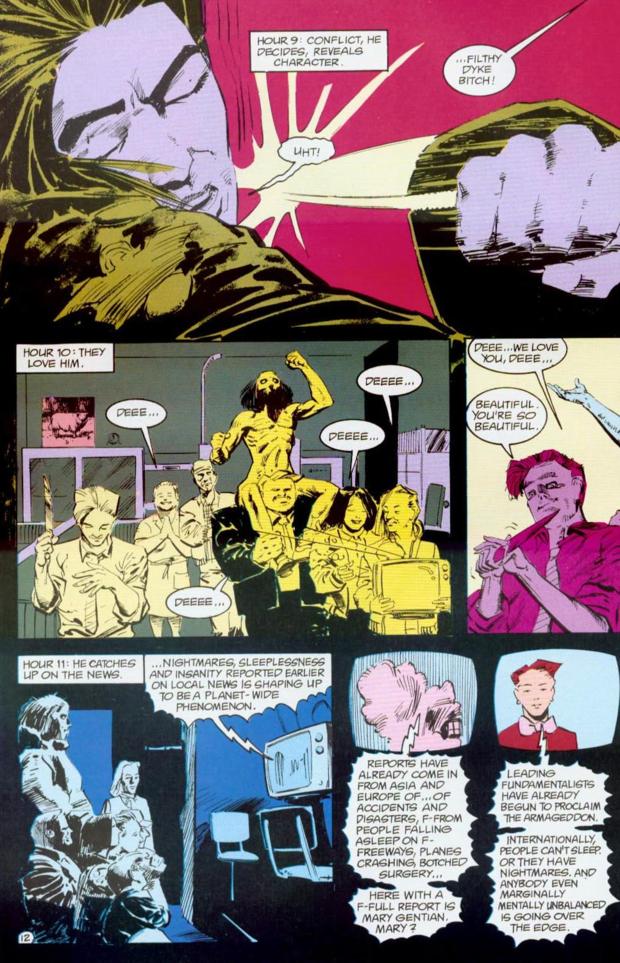 Neil Gaiman's entire Sandman saga was filled with creepy moments, but it was his first one that left the strongest impression. After many dreamless years at Arkham Asylum, longtime Justice League villain Dr. Destiny is reduced to a frail, psychotic version of himself. When Destiny reacquires his reality-bending dream stone, he breaks free for one of his darkest misdeeds yet. Settling in a diner filled some poor schmucks who are at the wrong place at the wrong time, Destiny gets to work. Controlling their minds, Destiny reduces the working class heroes into his demented puppets. They worship Destiny as a god, debase one another, cut off appendages, and literally rip each other's throats out. It's a 22-page grab bag of misery. But it's Gaiman's slow, methodical unwinding of the poor diners that shows the full breadth of Destiny's sadism. Each page is more hopeless than the last. A psychological hair-raiser, Gaiman proves in disturbing fashion that the most harrowing threats don't have to be physical—they can simply reside in your head. 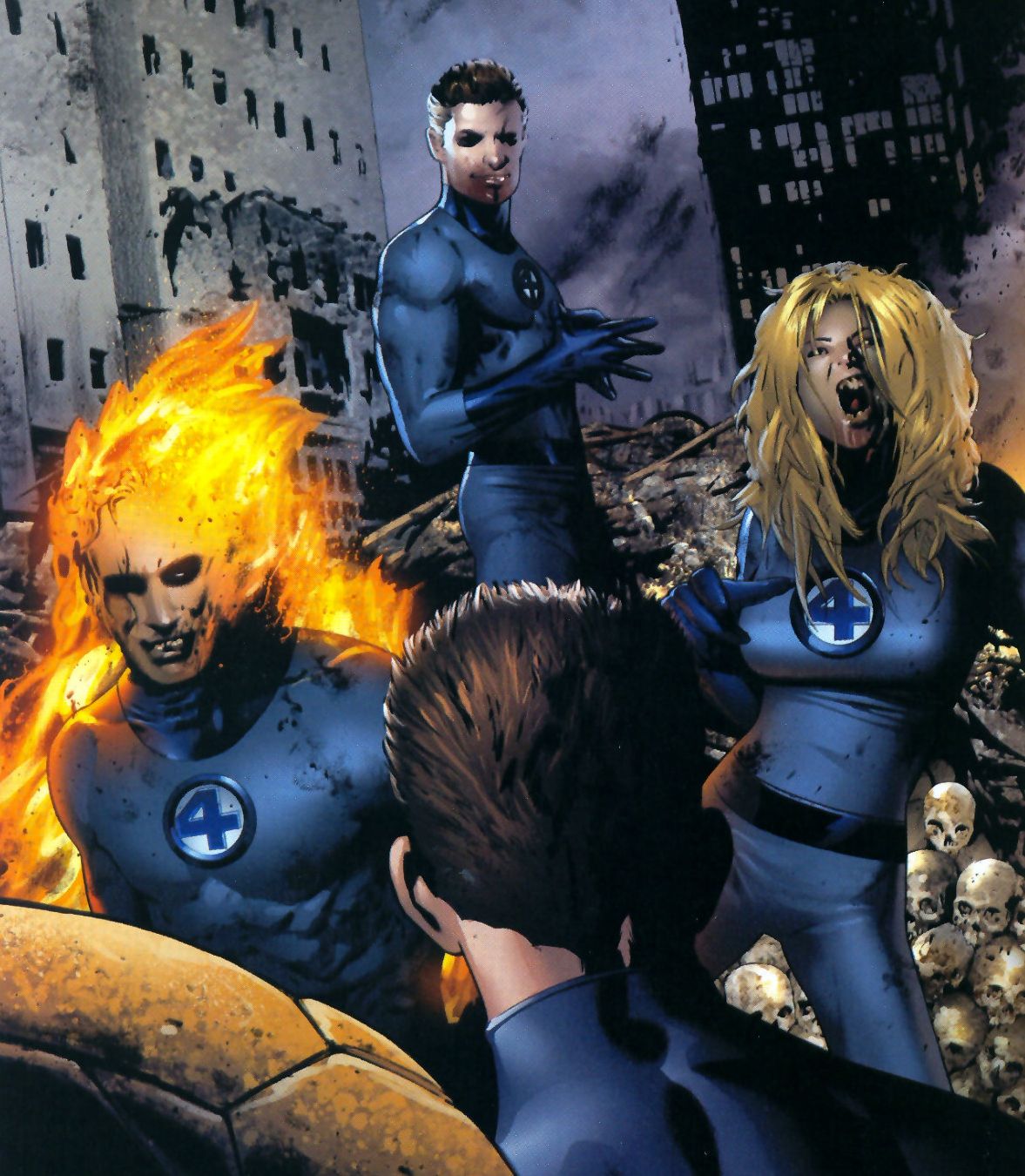 Marvel's first encounter with the Marvel Zombies, from Mark Millar's run on "Ultimate Fantastic Four," showcased just how terrifying a universe of flesh-mongering super beings could be. When Ultimate Reed Richards is lured into the zombie universe, he—and the reader—are misguided into thinking that it's the Silver Age 616 universe, where the sun always shines and the birds are'a chirping. When we arrive there, however, we see a dank, rotting world plagued by death. The tension mounts with each panel as Ultimate Reed realizes that something is horribly, horribly wrong. As Reed navigates through the post-apocalyptic hellhole, the reader keeps waiting for something terrible to launch out of shadows. And when the big moment does occur, it doesn't disappoint. Their grand entrance and assault on Reed plays out like a classic horror film. Credit must also go to artist Greg Land, who delivers some surprisingly disturbing depictions of the Marvel Zombies. It's not the type of scary that sticks with you for days, but it's good for a quick jump out of the seat.

The Most Frightening Moments In Comics