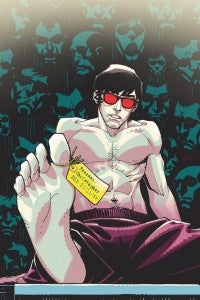 This morning, Wired's Geekdad blog reported that DC Comics would be launching a new anthology series of done-in-one stories, titled National Comics, in July. Named for a Quality Comics (a publisher DC acquired years ago), the title will supposedly revolve around a different character each month. The first four characters announced will be Eternity (possibly a reinvention of Kid Eternity), Madame X, Rose & Thorn and Looker. The first issue, starring Eternity, will be written by Jeff Lemire with art by Cully Hamner. As DC's only Eisner-nominated writer this day and the artist responsible for their character design bible, respectively, the pair have been key parts of the success of DC's New 52 initiative. Featuring a police coroner who dies and then revives with the ability to raise the dead, the "Eternity" is essentially a supernatural murder mystery where lead character Christopher Freeman can use that ability to solve murders by getting testimony from the deceased, according to GeekDad. As one commenter on Bleeding Cool has already implied, the premise sounds similar to ex-Heroes producer Bryan Fuller's canceled TV series Pushing Daisies, which at one point was supposed to have a DC miniseries to wrap up its dangling plot threads. The principal difference between the two appears to be that while Pushing Daisies featured a regular lineup of sidekicks for the main character, Eternity's mission allows the victims to briefly join him in solving the mysteries before moving on to the afterlife. There will also, presumably, be less pie. So far, the July solicitations released by DC today have not revealed any cancellations that would make way for the new series, so while Bleeding Cool is already beginning so speculate about which might be the next to go, the question really seems to be whether this title suggests a "third wave" of New 52 titles that might see a batch of new titles matched by a batch of cancellations, or whether it's more akin to things like THUNDER Agents and The Shade, which occur in the world of the New 52 but are not technically part of the line. It's also worth noting that, after Eternity, the next three issues will all revolve around female characters. DC took some heat at the start of their relaunch for failing to adequately represent female characters and creators in the eyes of some fans, and while they had promised to do something about it, only one of the six new "second wave" titles starting in May is headlined by female leads exclusively (that would be Worlds' Finest), and a recent lineup change in Justice League International appears to have had the result of losing three women from the team and gaining only one back. DC has had a shaky track record with anthology books in the recent past. While Legends of the DC Universe and The Brave and the Bold had limited success with the formula, Solo made it less than 12 issues and DC Universe Presents is in the lowest quarter of their New 52 titles, sales-wise. There's an obvious upside to keeping these kinds of titles alive, in terms of generating brand awareness for less-popular characters, but how much awareness can a book generate if it's only selling a hair above the "cancellation threshold?"

Craig of the Creek Gets Season 5 Renewal, Spin-Off Series and Prequel Movie

AEW's Kyle O'Reilly Announces the Birth of His Daughter Janie