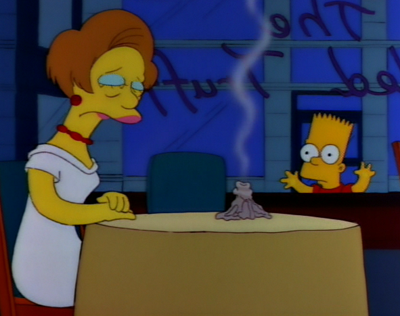 The producers of The Simpsons told Entertainment Weekly today that they will air a tribute to the late Marcia Wallace on this weekend's episode. Wallace, best known for her roles on The Simpsons, The Bob Newhart Show and Murphy Brown, played Edna Krabappel on the long-running animated sitcom. A re-run of American Dad which was scheduled as a lead-in to The Simpsons at 7:30 on Sunday will be replaced by the Season Three episode "Bart The Lover," for which Wallace won an Emmy. In the episode, Bart discovers that Mrs. Krabappel has been placing personal ads and sets her up on a fake date. When he spies on her and realizes how lonely and miserable she is, the tone of the episode shifts as Bart tries to help her find someone. Following that episode, the new episode will air, including a title card at the end in memoriam of Wallace. Recently, her character married Ned Flanders and has been referred to only as "Edna" since. It's unclear whether she kept her maiden name. Her character will be retired once all of Wallace's existing episodes have aired, and will be replaced by a new fourth grade teacher. How she'll be retired from the series isn't yet clear; in the past, actors who have passed away have had their characters silently written out, but none of those characters were as major or as deeply entrenched in the show's mythology as Edna. In an episode titled "Holidays of Future Passed"--the title a nod to the classic X-Men story Days of Future Past--a future version of Flanders referenced Edna's death, suggesting that it had been Homer's fault (like the death of his first wife, Maude).

Static: Shadows of Dakota #1 Review: Static Receives a Fantastic Shock to His System

Scarlet Witch Gets the Spotlight on Derrick Chew's Avengers #1 Cover