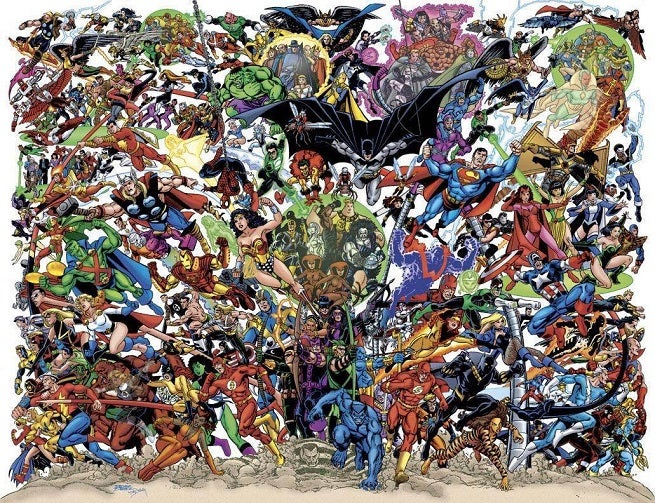 In a new "One-Shot" web short, Variant Comics has put together a two-minute presentation about a time in 1984 when Warner Bros. almost closed down the DC Comics publishing imprint and licensed the characters to Marvel.

The story, as related in Sean Howe's Marvel Comics: The Untold Story, is that in 1984, Warner Bros. brass thought DC was dead weight and offered Marvel, whose management they believed to be superior since the books were selling better, the opportunity to take over stewardship of the DC characters.

The video, embedded below, details that Marvel would have continued to publish DC's seven most popular properties -- Superman, Batman, Wonder Woman, Green Lantern, Justice League, Teen Titans and Legion of Super-Heroes -- and would have had room to expand the line later if they so chose.

Marvel apparently declined, thinking that the reason DC was failing was the characters, not the management, and that it was unlikely it would have been a profitable venture for Marvel.

Ironically, of course, a little over a decade later, Marvel spiraled into bankruptcy and before it was totally out, they had their fair share of potential buyers, too.

According to Image Comics co-founder Rob Liefeld, who spoke with ComicBook.com Editor-in-Chief Jim Viscardi on the Let's Talk Comics podcast recently, those old rumors that current DC Co-Publisher and Image co-founder Jim Lee was in talks to purchase Marvel during the bankruptcy are true, and maybe came closer to being plausible than anybody knows.

There was also some discussion at the time about Stan Lee Media buying Marvel, and when they couldn't manage to put together the cash at the time, Lee turned to pop star Michael Jackson, who had expressed an interest in getting a Spider-Man movie off the ground (he had mistakenly believed Lee to own the rights). They talked about trying to buy the company together, but Marvel management didn't want to sell to Lee and inflated the price to where Jackson walked away, according to Lee.

The Story Behind The Time Marvel Almost Bought DC Comics