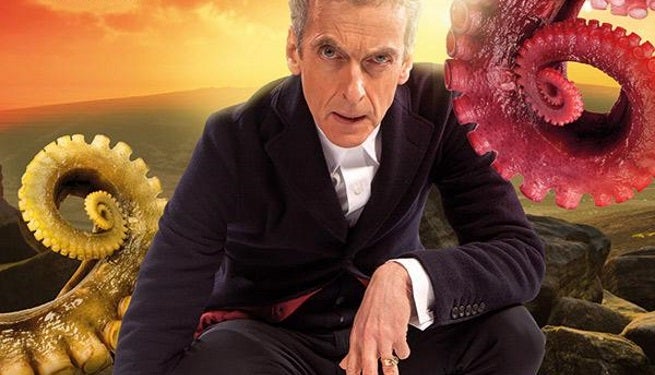 Titan Comics has announced that Colin Bell and Neil Slorance, the award-winning creators of Dungeon Fun, Chloe Noonan, and House Party, will lend their talent to Doctor Who with a new series of humorous backup strips featuring the Twelfth Doctor.

Beginning in Doctor Who: The Twelfth Doctor #2, each issue of the series will feature a one-page comic from Bell and Slorance that tell of some of Clara and the Doctor's more humorous misadventures.

"To be the men who put the words in the mouth of The Man Who Stops The Monsters is an incredible honor for us both," says Bell. "We're concerned with what happens in the smaller moments between crises, when the galaxy's not being saved. Who takes the bins out? Where do they go for lunch? Neil and I hope to answer these questions; and as always, the answers await us... in time!"

Bell and Slorance's all-ages Dungeon Fun comic won four Scottish Independent Comic Book Awards earlier this year. They join a full lineup of Doctor Who backup comic creators, including Rachael Smith and Emma Price on Doctor Who: The Tenth Doctor, and Marc Ellerby on Doctor Who: The Eleventh Doctor.

"As someone who loved Matt Smith's time as the Doctor, I'm over the moon to be involved with the brand new comics," says Marc Ellerby. "I'm donning my fez and raggedy blazer to help power through the drawings!"

"I'm so excited to be able to work on these strips," Rachael Smith adds. "I'm having so much fun writing for the characters!"

Emma Price says, "It's thrilling being able to support such a diverse and accomplished range of creators in a new era of comics adventures with the Doctor!"

"It's a delight to showcase the work of some immensely talented indie creators through the Doctor Who comics," says Doctor Who editor Andrew James. "Hopefully we're introducing our readers to a whole universe of new writers and artists, as well as offering some charming and hilarious shorts with these beloved characters."

While humor strips remain a rarity in mainstream comics, Titan's Doctor Who backups may be on the cusp of a trend. Erik Larsen recently reintroduced a funnies page backup to Savage Dragon.

Doctor Who: The Twelfth Doctor #2 goes on sale November 19.