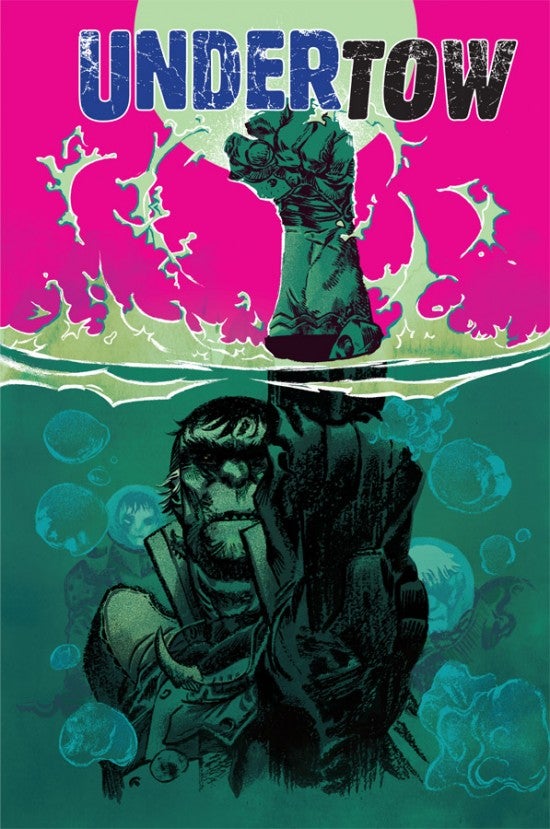 With its first issue in stores now and receiving rave reviews, Image Comics's Undertow by writer Steve Orlando and artist Artyom Trakhanov is winding down its order cycle for the second issue--which hits stores next month, with a final order cutoff of today. He joined us to talk about the issue, the design aesthetic of the strange Atlantean world they've created and the politics of a book that takes place in a futuristic world where humans are essentially just slightly less-hair apes. Remember, though, that this is a spoiler-filled conversation. If you haven't read Undertow #1 yet, go buy yourself a copy and come back to read along with us--or head down to your local comic shop, pick one up and order the next, because you can do that for another day. 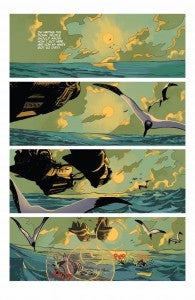 Seems worth noting that the outfits and weapons we see the characters using in these opening pages feel more science fiction than medieval-looking fantasy, no? Steve Orlando: Definitely! The roots here are Frank Herbert, more than T.S. Eliot. But more than that, this story takes place in the present day, instead of the past. It always struck me strange that Atlantis in modern stories is a medieval kingdom living side by side with a metropolitan human culture. So what we did is we took those medieval times and put them in Undertow's past, just like it's in our past. So all those castles and magic, seahorse cowboys and the like, MAYBE they did happen, maybe they didn't, but if they did it was thousands or hundreds of years ago. We treat it like Pre-History in Chinese mythology, where there are a line of mythical emperors that segue smoothly into emperors that were recorded in history. So we put Atlantis in the present day, with all the technical advances that can happen in thousands of years. And we have a dash of Sci-Fi certainly, with the use of Percy Greg's "Apergy" energy from his 1880s novel Across the Zodiac. ComicBook.com: Is it a challenge to write a character who's relatable and sympathetic when he tells you in the opening pages all about his wealthy upbringing? Orlando: I think it helps that he's given all that up. But beyond that, Ukinnu's life is more about feeling trapped and wanting to take control. And that's something we can all relate to. Yes, he is trapped by overbearing, social butterfly parents who are more interested in his life being a subsection of their own Wikipedia page, but we've all felt trapped by something. We've all had that moment of clarity where we can feel things going off the rails a bit. For Ukinnu, he was so far off the rails he had to bounce back something drastic. And that feeling of being unsatisfied, whether you're monied or not, is infinitely relatable. It actually says a lot that no matter wealthy or middle class or poor, the same problems live in our hearts, even if they look different in our day to day lives. And maybe that's something to think about. 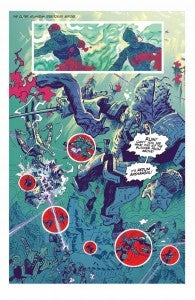 There seem to be a lot of slightly-different designs at play for the character's face shapes and the like. Is that a question of trying to differentiate people who are all underwater and treated to the same color palette, is it my imagination or is it something else--slightly different species, etc.? Orlando: We are trying our damndest to make this world as diverse and multi-faceted as our own. I certainly don't want to spoil anything, but the heart of all the design decisions comes from a place of observation. Again, if Atlantis has been around for thousands and thousands of years, of course they'll have diversified the way they look, just like humans have in our world. So just like us they have a basic anatomy, but the rest is up in the air. It never made sense that Atlanteans all had blue skin and the same haircut. Artyom has designed hundreds and hundreds of faces, many of which will not be main or even supporting characters, just so we have a cache of unique people to fill backgrounds. ComicBook.com: You've talked in the past about how Artyom wants to know how everything works...how do the projectile weapons work underwater? Orlando: The projectiles work in a variety of ways, but there are three main types of weapons. Bullets do not truly exist as a weapon, since they require a small explosion to fire, which would be challenging without open air. The earliest modern weaponry uses compressed water columns, firing forward in a straight line from the gun. This works on a similar principle to the way Jet Skis created propulsion, but on a smaller, compact, and more powerful scale. Ultraviolet lasers are another field of weaponry, using focused light and heat to create a faster moving killing beam that also suffocates those nearby by boiling the water in the very immediate vicinity. And the most dangerous type of weapons are the Apergy based weapons. This is a gravitational energy whipped up in dynamos that can circumnavigate the laws of physics. It can be used for flight, and as a weapon, it travels through water effortlessly. It is also the most unstable energy used in weapons, and the machines using it have still backfired and blown up from time to time. 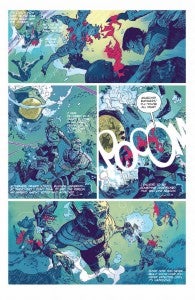 Talking to you before release, I got the impression that this was happening a little more present-day. Those humans, though, are quite un-evolved. Do our characters have really long lifespans? Orlando: Atlanteans live roughly as long as we do, and the story is definitely set in the present day. The rub is that evolution passed over humans, and by chance, it was Atlanteans that evolved higher reasoning centers in their brain. So humans have gone a different way, continuing along a divergent pre-homo sapien path. They're actually relatively evolved, but in a different way. They're an apex predator, smarter than most animals, but still animals themselves. They've specialized, just like animals in different climates do. So, plains and desert humans are almost hairless, jungle humans have longer arms and claws for climbing, and cold weather humans on the tundra have a thicker, white coat of hair. ComicBook.com: It's funny becuase you've talked about the Amphibian as having this kind of creepy, bigger-tahn-life description and that's how everyone seems to view Redum at the start of the issue. Is that an intentional parallel? Orlando: The Amphibian and Redum are definitely paralleled, but perhaps it's more apt to say they're contrasted. The Amphibian, if he exists, would be a wonder and an icon simply by birth. His legend, and the fear and mystery surrounding him, are all things that happen simply because of how he was born. Anshargal, though, is a persona created specifically to elicit a response from people. He has to work hard for everything that comes naturally to the Amphibian. He's a made-up character, and he has to sacrifice everything personal just to be that icon for his people every day. And that in of itself is creepy. What does that do to a man? How long can he be running in the red for? Years? Decades? Until he makes a mistake. Both characters are feared by Atlantis, but are two sides of a coin. The Amphibian is thought to be a myth, but has always been real. Anshargal is known to exist by Atlantis, but he's an invention of a man laid low by his past. 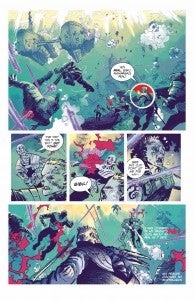 I love the visual use of the asterisks...it reminded me a bit of "Sherlock." Was that scripted or something Artyom brought to the table? Orlando: The Asterisks were something I totally owe Artyom. Once we decided on an alphabet to go with the Atlantean language, we realized we wanted people to be able to see it, but not have to go somewhere online to decode it. With Atlanteans already talking in vernacular (which is a nod to David Milch's Deadwood, where the period-inaccurate dialog helps viewers relate to an unrelatable setting), we wanted to remind people they were a different culture, but not drive them away. Artyom brought up using the alphabet he created, but translating it immediately on the page, to give people the best of both worlds. ComicBook.com: Atlanteans are fat and happy, easily distracted but not all bad? Sounds basically like Americans, doesn't it? Orlando: I would say it's more like the world as a whole. The true crime in Anshargal's mind is complacency. He's fighting against the evil ones, or so he thinks. But if you don't care, then in his mind you're complicit in all those crimes Atlantis commits, AND you lack the conviction to even stand up for your views, whether Anshargal agrees with them or not. This attitude is a "what if" for our world culture, where we don't mind bad things happening as long as we can't see them happening. Tragedies in other cities, other countries, other continents, often hold no more real life impact on our daily life than the latest New Yorker cartoon. And if that thinking goes a little farther, that's when the few in power can take the wheel. That's where we hope to never go, and it's where Atlantis is. It's like Soylent Green, with people surviving off of other people, but in a less literal way. 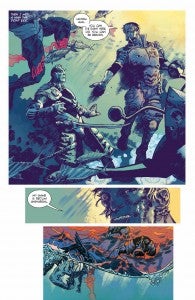 Does Artyom bring a slightly different take on that to the table, given the fact that he's not from the U.S.? Orlando: I think he certainly does, but also that we connect in a lot of ways, since I spent time living in Russia. Now having said that I was in Vladimir, still the European part, and Arytom is in Novosibirsk, in Siberia. Totally different. But I think the interplay between us creates an interesting point of view. Working as part of an international team (and Thomas Mauer, our letterer and designer, is from Germany), is so helpful when you're doing worldbuilding and creating a new culture. It makes sure you don't settle into some comfy nationalism, and realize that yours is not the only culture. They bleed together, and what makes it through by diffusion is often just as interesting as what doesn't. ComicBook.com: I love that creature design on the last page. Where did you guys get the characteristics of that beastie? Orlando: SCIENCE! The Sea Locust is actually right out of the wonderful, horrifying world of nature! And that's another thing we've wanted to do, is frame creatures in Undertow as these wild, amazing beasts, but then reveal they exist. The one difference is that the Sea Locust, based off of the Mantis Shrimp, is the size of a moose, and Mantis Shrimp fit in an aquarium. But they're awesome. Their claws strike so hard they can crack open your hand, or a crab's body. The water boils at the point of impact. Now imagine something like that but the size of a Ford Explorer, and you know that bodies will be piling up in Issue 2.