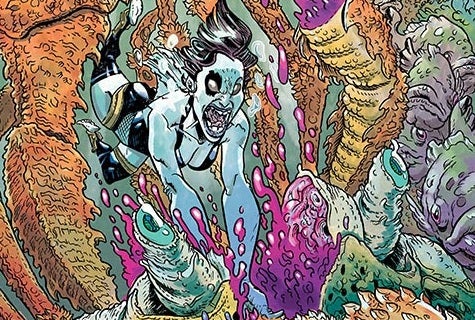 , writer Steve Orlando and artist Artyom Trakahanov's upcoming series about a band of Atlantean refugees seeking  shelter from corruption and consumerism by heading to the surface world in a massive ship, has its final order cut-off on Tuesday ahead of the first issue's release on February 19. Recently, we spoke with Orlando about the series, and about reinventing Atlantis for comics, changing it from a place where people happily ride sea horses to one that's a bit grotesque and alien--more like the real undersea world. We brought you the first part of the conversation not long ago, and here's the second. The third and final portion of the conversation will run near the release date. 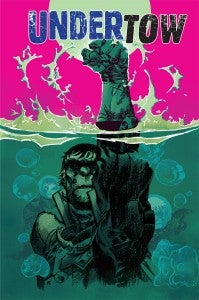 ComicBook.com: The first thing I thought of when you described the series was that there's a bit of The Grapes of Wrath in this book. Anybody who's trying to flee from corruption and consumerism and comes here is going to be disappointed. Best-case scenario, what is going to happen to these people on the surface? Steve Orlando: That's a large thrust of the first arc. There's a lot going on, in between fighting enormous, weird sea monsters which are actually land monsters in this instance, one of the big secondary stories is that a lot of people on Anshargal's ship which is called The Deliverer, they want to settle. They don't want to have this kind of constantly-moving lifestyle where they're never able to settle down but of course there's problems with that. They can't go out of the ship without having these enormous spacesuit-type of apparatuses that keep them able to breathe and filter the outside oxygen into their lungs and things like that. So at home people are certainly feeling that because they thought they signed up for one thing but now they don't even have a permanent home and the question is, how do you do that? So as you meet the characters in the first arc, they're going out to hunt this cryptid--sort of the Bigfoot of the Atlantean world, which is called The Amphibian, which is sort of my big sort of Conan-meets-Aquaman type of character in that he's supposedly an Atlantean who can also breathe air. But nobody's ever seen him. They're hunting for him in the hopes that they can find his DNA and maybe not their generation but future generations can really find a way to live on land through gene therapy. And of course some characters in the group know a lot more about him than they're letting on and some people are pretty sure that he's real from personal experience. So they're trying to find a way to do that, but you have whole other groups on this ship. A lot of the fun things about the book are about how cool the ocean world is and it seems like science fiction but it's not. It's just weird, oceanic stuff. So there's people on the ship have a strong political theory--because people in Atlantis, like sharks, if they stop moving they stop living. So there's a philosophy that people on The Deliverer are the only ones who are living the way Atlanteans should. So there's huge conflicts about even what life means there. When you have thousands of people living in one place--and the ship is the size of a city, which is my little Warren Ellis allusion because I grew up on The Authority--no one's going to really have the same amount of being into whatever lifestyle there is. So trying to figure that out and make everybody happy is a huge thing and it's really important to the secondary plot. Right between the laser fights and giant condors and things like that. 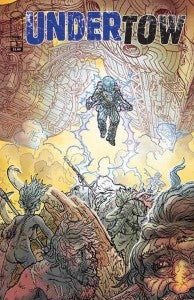 ComicBook.com: It almost seems like there's a little corner of the Image Universe that's very different takes on cryptid books but that fit nicely together in a way, with Proof and The Perhapanauts and now Undertow. Does that even occur to you as you're making it? Orlando: I've actually sat next to Todd [Dezago, co-creator of The Perhapanauts] at the Albany Comic Convention. It didn't occur to me, but yes I see it. My whole thing, when I came to the book, it started as a pitch a long time ago that was going to be crime fiction in Atlantis. That's like four years ago. So I came at it from that but I couldn't find a way to really make that work. But I see it and I would be in on that--in that a lot of these tropes about Atlantis should be a lot scarier than they are. We've gotten used to--and not that there's anything wrong with Marvel and DC and the way they do their underwater characters--but they're all really gorgeous and not very alien and the real underwater world is incredibly alien. Making them stranger and in many ways more unsettling and more realistic, it is definitely a big part of the book. These cryptid animals wouldn't be around--people wouldn't be talking about them--if they were't like one-half step away from real things and that's a lot of what the book is about. I guarantee if you read this you will see Atlantean characters that you've never seen them do before and that's a lot of what I wanted to do but it's also part of working with Artyom--he needs to know everything about a world. When I started, I certainly knew how they did certain things. You will find out how Atlantean characters who are partially fish have sex--but I didn't have to figure out how they go to the bathroom until I started working with Artyom. He was like, "Well, what does the bathroom look like?" And I said, "Nobody cares about that," but he does. Even just small things you wouldn't even think of, in a situation where gravity doesn't work the same way or things are more buoyant. So they have weird adaptations and they almost look human, but then it's like, "Okay, this is totally alien to me." And yes, and I thought that way about Namor and Aquaman and that's why I wanted too push it even further and push it to this more monstrous sort of character. If and when you meet The Amphibian, he certainly doesn't seem heroic and he's much more horrifying than almost anything except maybe late 1980s Aquaman blue camouflage costuming. There's not a whole lot that's scarier than him in the book. That's the way it should be when you think about what these characters can do. In that approach it's like that--if superheroes really existed, they would be a lot more frightening and a lot of times I feel like we've gotten away from that. And that's where we've gotten with all these Atlantis books. Repositioning everything has made it fun and allowed me to do something at least slightly different from what other people are doing.

Undertow's Steve Orlando On His Alien, Frightening Take on Atlantis