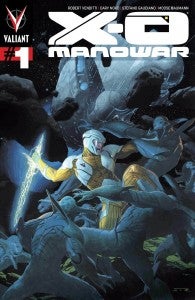 Chalk up another one for ComiXology--the popular online comics retailer and viewing platform announced today that it will join forces with the newly-relaunched Valiant Comics to bring titles like X-O Manowar and Harbinger exclusively to their app and online marketplace. Bleeding Cool has speculated that the move will also include collected editions, meaning that ComiXology would be the only place to get the content and unsupported devices--like Barnes & Noble's Nook Color and Nook Tablet e-readers--would not have access to the Valiant library. There doesn't appear to be anything in the initial statement to specifically back that assertion up, and we have reached out to Valiant for confirmation. In addition to releasing the first issue of X-O Manowar day-and-date today, the publisher's ComiXology store will also carry the first six issues of the 1992 volume of that title (by Jim Shooter, Bob Layton, Barry Windsor-Smith and Joe Quesada), as well as the first six issues of Shooter and David Lapham's Harbinger and the first four issues of Kevin VanHook & Don Perlin's 1994 take on Bloodshot. According to a press release issued jointly by the two companies, the plan is to eventually digitize all 20,000 of Valiant's back issues. "For the first time, through comiXology's platform, Valiant Comics will be available anywhere in the world," said Valiant CEO Jason Kothari in the press release. "With Valiant's return now in full effect with today's release of X-O Manowar #1, the timing couldn't be better to remind people once again of the incredible characters and stories that made Valiant a household name." Valiant, who had not made any digital announcements before now and who appeared to be siding with brick-and-mortar retailers by providing incentive covers that rewarded fans who purchased their books through comic shop subscription services, acknowledged the direct market in the press release, noting that their entire catalog would qualify for ComiXology's Digital Retailer Storefront program, which allows fans to buy their digital comics "from" their local store via ComiXology, and the local store to get a cut of the sale.

"There's tremendous excitement around Valiant's return, and they're bringing with them one of the greatest libraries of characters and stories in comics," said ComiXology CEO and co-Founder David Steinberger. "We couldn't be more proud to partner with Valiant in the digital marketplace. We're sure to see the original Valiant fans energized by making these great comics available across the globe, while also bringing in a whole new generation of readers."