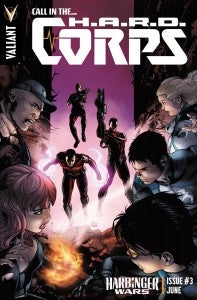 In the back of this year's Free Comic Book Day offering from Valiant Entertainment, a number of new titles are announced. While many of them have been rumored (or even announced) for some time, one of the titles comes as a complete surprise. So if you don't want to know, stop reading now. First, what we knew - Eternal Warrior is set to get his own comic, spinning out of the pages of Archer & Armstrong, in the summer, joined by H.A.R.D. Corps, spinning out of Harbinger Wars. Originally Ninjak was teased for a September 2012 release, spinning out of X-O Manowar, but that book never materialized and is now set for this summer as well. Added to the pile, somewhat unexpectedly and with no teaser art whatsoever beyond the logo, is Unity, set for a winter release. The original Unity took place in 1992 and was a crossover event, rather than a series in its own right. It explored the Valiant Universe after the Mothergod began attempting to rewrite reality and restore her original universe. Much of the story took place in Turok's Lost Land, which is not part of the new Valiant Universe (unless there's a much bigger announcement coming than anyone expects). Rai's relaunch, teased along with Eternal Warrior in last year's Free Comic Book Day issue, is apparently on hold. We've reached out to Valiant for comment, but since everyone is at the Chicago Comics and Entertainment Expo (C2E2) this weekend, we don't expect a speedy response. Because of C2E2, it's unclear whether Valiant will make some or all of these announcements over the weekend or whether they'll wait and let the news break as part of the Free Comic Book Day push, as they did last year. No creative teams are named, but it's hard to imagine that Joshua Dysart--the Valiant-exclusive writer of Harbinger and Harbinger Wars--wouldn't be taking on H.A.R.D. Corps.

Lucha Underground Is Streaming Again, It's Just Harder to Find