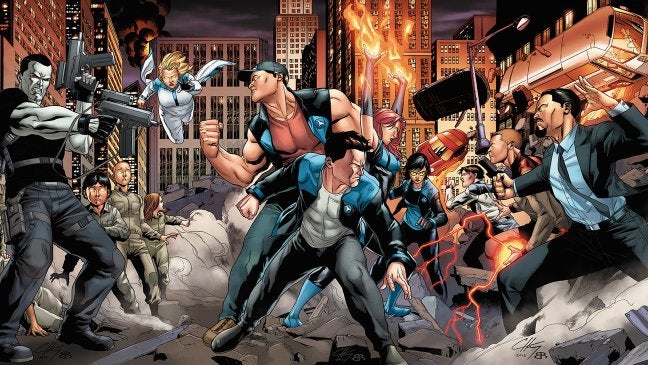 Valiant Entertainment has officially signed on with Sony Pictures, entering a five-picture deal that will bring a Valiant Cinematic Universe to life.

Valiant's cinematic universe will officially begin in 2017 with a Bloodshot solo film directed by John Wick's David Leitch and Chad Stahelski. A Harbinger film will hit after that, followed by a sequel for both franchises. The deal will then climax in a Bloodshot and Harbinger crossover film called Harbinger Wars.

Leitch and Stahelski will work off of a screenplay by Jeff Wadlow (Kick Ass 2) Eric Heisserer, while Matthew Vaughn and Jason Kothari will executive produce. And while Harbinger's director is still a secret, Heisserer is confirmed as its sole screeenwriter. Valiant's Chief Creative Officer, Dinesh Shamdasani, will produce all five films with Neal H. Moritz and Toby Jaffe from Original Films, and Andrea Gianetti from Sony.

Harbinger Wars takes its name from the 2013 Valiant mini-series, where Bloodshot, an amnesiac, nanite-enhanced soldier, clashes Harbinger's cabal of super-powered teenagers and runaways.

Though Valiant has discussed movie plans since its re-launch in 2012, this is their largest cinematic development yet. The publisher announced last month that it had received a nine-figure investment from DMG Entertainment for its film and television endeavors. And while Bloodshot and Harbinger are one Valiant's fast-track, Valiant is also developing films for their Archer & Armstrong and Shadowman titles.