Well, clearly we're not going to hit on all of the strange, wacky war stories told in comics in one article. There was, after all, an actual comic book called Weird War Tales, which ran for more than ten years from DC Comics. Still, a day to celebrate our own veterans seemed like the perfect opportunity to look back at some of the highlights of that and other comics where, let's face it, sometimes some pretty strange things happen during war time. And while most of Marvel's war heroes were pretty normal and human, we're sure there are some out there that we've missed. Please, by all means, chime in in the comments. 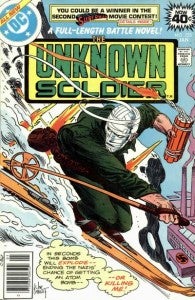 The Unknown Soldier These first two are the most obvious ones, but it doesn't make them any less strange or awesome. The Unknown Soldier, in DC Comics, is not an abstract concept but rather a concrete identity. Depending on the version you're reading, he can he either a driving force in a single war, or a more minor player in every war throughout history. 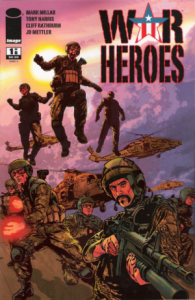 War Heroes Alright, so these guys are only weird by virtue of the fact that this kind of stuff doesn't happen anymore, but realism lovers Mark Millar and Tony Harris got together back in 2008 for a solicited six-issue miniseries that revolved around the question fo what might happen if the U.S. government were to distribute super-powers to American soldiers serving in Iraq and Afghanistan. We never really found out, since the series never actually concluded, but it's a cool concept, and strange in that it was being done with the currently-ongoing conflict and by a writer who you wouldn't expect.

Dr. Manhattan Becuase of the fact that his time in Vietnam didn't totally define his character the way it did The Comedian's, people tend to downplay the fact that Dr. Manhattan was brought in (and succeeded) to end the war. In...umm..dramatic fashion. 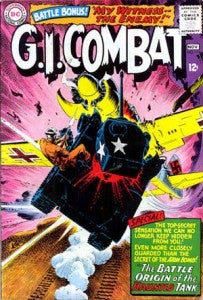 We'll let Wikipedia have this one, since this is as succinct as it gets: "The feature centers on the ghost of 19th-century Confederate general J.E.B. Stuart, who is sent by the spirit of Alexander the Great to act as a guardian over his two namesakes, Lieutenant Jeb Stuart (named in the early stories as Jeb Stuart Smith, but eventually just shortened to Jeb Stuart) and the Light Tank M3 Stuart that Jeb commands." And, yes, it's as hilarious and awesome as it sounds. 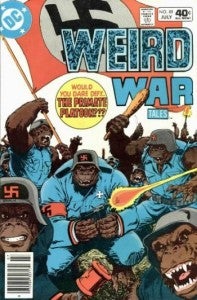 The Primate Platoon So this was a group of bad guys--Nazi gorillas, to be exact. And if that's not enough to send you running for the back issue bins, then I don't know what is. As an extra added bonus, Julius, one of the gorillas in question, later appeared in the brilliant Brian Azzarello/Cliff Chiang story Dr. 13: Architecture and Morality. 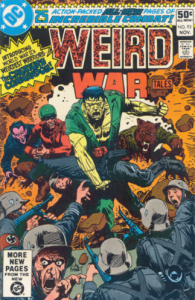 Snoopy's World War I Flying Ace Let's face it--one of the great, iconic soldiers in the history of comics, right? I mean, there can't really be any doubt. Even though he never starred in an ongoing, monthly comic, this was part of many of our lives growing up--to the point where I'm pretty sure seeing It's the Great Pumpkin, Charlie Brown! was my first exposure to the concept of war.