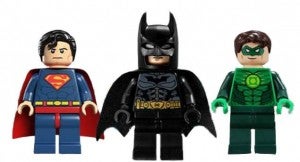 Sometimes you can't have too much of a good thing. That's apparently the philosophy of Warner Bros. (in conjunction with DC Entertainment) Lego have, as today the companies announced an extension--and expansion--of their current licensing agreement. The multi-year agreement gives Lego access to the entire DC Comics character collection, including Batman, Robin, Catwoman, The Joker, The Riddler, Two-Face, Poison Ivy, Harley Quinn, Bane, Bruce Wayne, Superman, Lex Luthor, and Wonder Woman. All of the aforementioned characters will be part of the 'Lego DC Universe SUPER HEROES' collection, which is slated to launch in January 2012. "Given the fan enthusiasm for previous LEGO BATMAN collections, we couldn't be more thrilled to continue the build-and-play adventures with the new LEGO BATMAN play sets and the addition of other DC Comics properties, " said Jill Wilfert, vice president, licensing and entertainment for The LEGO Group. Great move by all parties. The only negative? Product won't make it in time to reside under my Christmas tree.