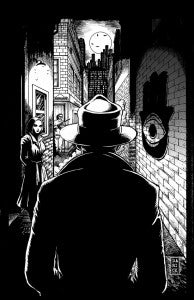 One June 26, Transmetropolitan co-creator Warren Ellis appeared in London at a university where New York-based investigative journalist Greg Palast was rolling out the U.K. release of his new book, Vultures' Picnic. "I know a journalist whose truth-telling has left a trail of fire halfway across the world," Ellis told the audience of Palast, whose best-selling books and documentary films have cemented his reputation as an expert in environmental and electoral malfeasance worldwide, but especially here in the U.S. There's a comic book adaptation of the book coming along in the not-too-distant future, on which this writer is serving in an editorial capacity, and Palast also has a comic book component included in his upcoming book Billionaires & Bailout Bandits. ComicBook.com spoke to Ellis shortly before he went onstage in support of Vultures' Picnic, and he told us that he was "carried along by the drunken swing of Greg's prose." So it's probably not surprising that he offered up a pretty great introduction, and that Palast's people in turn managed to get it filmed and up on YouTube (you can see it below). The speech, titled "Money Isn't Real," can be read in its entirety at Ellis' website, with the Cliff's Notes version available on Palast's. Check it out; Ellis is a guy who has more of a way with words than the next ten people you'll meet combined, and it's always good to hear a guy like that talk about something that makes him engaged and passionate.