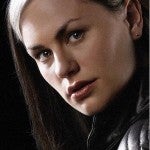 The success of the 'X-Men' franchise has spawned a number of future films, including 'X-Men: First Class.' That particular installment will concentrate on the younger X-Men characters. Will that include Rogue? Over at IGN, Anna Paquin, who plays Rogue, indicated that she'd definitely love to reprise the role. However, she has one request for screenwriter Josh Schwartz:

"You know, as much as I loved doing those films I was kind of like, 'OK, so when do I get to beat someone up? When do I get to steal some powers?' You know Sookie [Paquin's True Blood character] gets to do more action than Rogue ever did. So I'm just putting that out there. More action please, for next time."

Will Anna Paquin Be in X-Men: First Class?