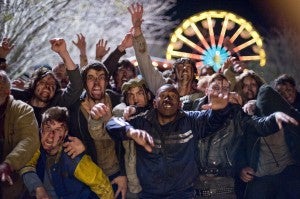 Amazon Studios officially announced today what people in the know have known about for a while: There will be a pilot and possibly a series based on the cult-hit comedy Zombieland. The pilot, which is reportedly already complete, will be one of a number of pilots released through Amazon Prime's live-streaming service and a variety of factors including customer feedback will determine whether it continues past the pilot to a full series. "Zombieland is a fan favorite and we can't wait to see where this story line goes in a serialized format," said Roy Price, Director of Amazon Studios. "We've been announcing a lot of exciting exclusive content for Prime Instant Video, like Downton Abbey, Under the Dome, and Justified, and we think adding original shows to that lineup is going to make Prime even more enticing for customers." Zombieland is based on the movie of the same name, and finds four survivors outwitting zombies and searching for a place to call home. The Zombieland pilot comes from the feature film's original creative team, writers Rhett Reese and Paul Wernick, and producer Gavin Polone. Eli Craig is directing the pilot. The part of Tallahassee will be played by Kirk Ward, Maiara Walsh is cast as Wichita, Tyler Ross will play Columbus, and Izabela Vidovic has the role of Little Rock. "Zombieland will strive to break the rules—action, adventure, thrills, chills and laughs and all packed into a half hour format," said creator Paul Wernick. "This is not your average show but Amazon is not your average network." The pilot has been in development for quite a while but just moved to Amazon back in January.

Zombieland Pilot Gets the Green Light at Amazon