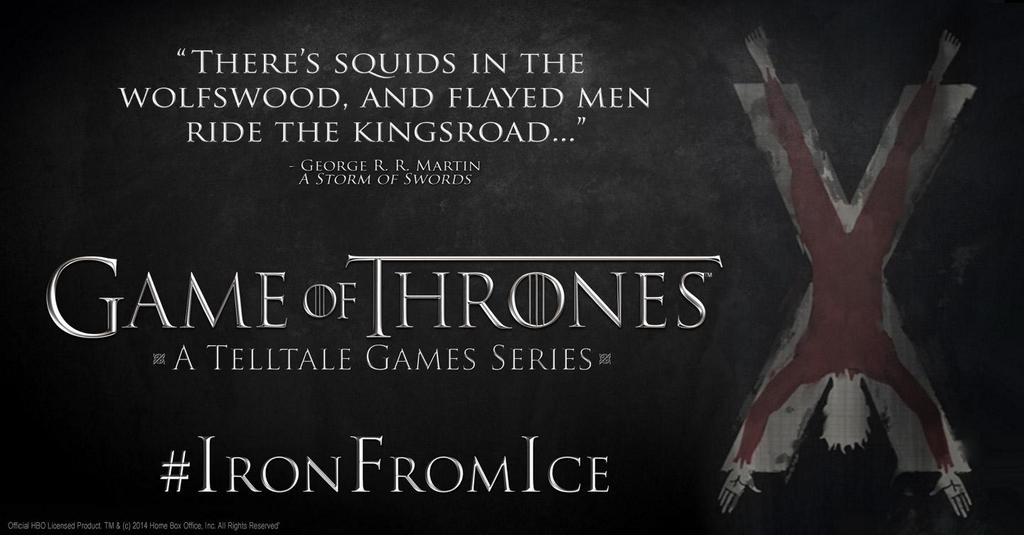 Telltale Games has released another teaser image, hinting at what is to come from their upcoming Game of Thrones video game series.

The teaser quotes from the third book in the A Song of Ice and Fire series, A Storm of Sword: "There's Squids in the Wolfswood, and Flayed Men ride the Kingsroad…"

The image includes the Flayed Man sigil of House Bolton, the traitorous house that allies itself with the Lannisters to betray Robb Stark at the Red Wedding and take power in the North, with Roose Bolton being named Warden of the North. The tweet the image was included with also emphasizes the second half of the quote, heavily implying that the Boltons will be involved in the video games' narrative.

The quote itself is said by a member of House Liddle, one of the Northern clans. "Squids" refers to the Greyjoy men that have also shown up in the north. The quote is excerpted from a statement in which the Liddle is comparing the chaos in the North after the fall of House Stark to the complete safety and security in the North when there was still a Stark in Winterfell.

This teaser further implies that the game will be set in the North, as previous teasers have mentioned other Northern houses. They have also all mentioned forests, woods, or trees.

There's been no official release date announced for Telltale's Game of Thrones game yet, but the first episode is expected to debut by the end of 2014.

Another Game Of Thrones Teaser Released By Telltale Games