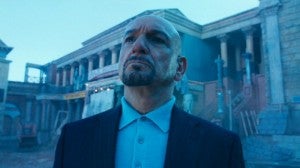 Academy Award winner Ben Kingsley is in talks to star as the villain in Marvel Studios' upcoming sequel, Iron Man 3, according to a report from Variety. While Jon Favreau, who directed the first two films, had previously stated that he wanted to use The Mandarin as a villain in the third installment, director and co-writer Shane Black seems less keen to do so and, according to Variety's sources, Kingsley will definitely not be playing the character. The film, which is scheduled to open in theaters on May 3, 2013, will go before cameras later this month or early next. This will hopefully settle once and for all the ages-old question of who would win a fight between Mahatma Gandhi and Charlie Chaplin.