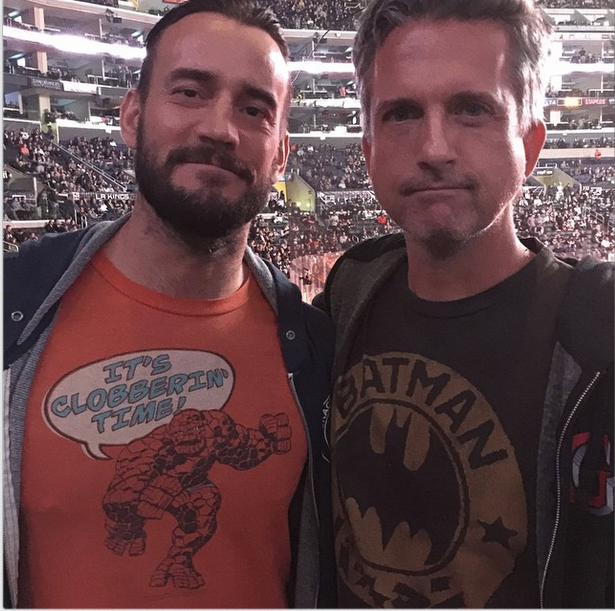 In a star-crossed meetup, CM Punk and Bill Simmons ran into each other at last night's Sacramento Kings game.

But more importantly, both were rocking some mean-looking comic book T-Shirts. Not wanting to miss the rare opportunity, Simmons posted a photo of the two on his Instagram, geek pride front and center.

Punk, a retired WWE wrestler, appropriately wore a shirt featuring the Thing and his catchphrase, "It's Clobberin' Time." Simmons, the Editor-In-Chief of sports website Grantland, brandished a Bat-Signal T-Shirt.

Punk is an outspoken comics fan and has even collaborated with Marvel Comics on occasion. He wrote the introduction to the Avengers Vs. X-Men hardcover collection, and has appeared on "Fightin' Fanboys," a Marvel web series highlighting fighting professionals who read comic books. Simmons' Grantland routinely runs articles and thought-pieces on the comics industry, though Simmons himself has never referenced a personal interest before.

Based off of the photo, it looks like Simmons might be a DC guy. And Punk is clearly a Marvellite. While Comicbook.com tries its best to remain neutral in the ongoing DC Vs. Marvel war, we think we can safely side with Marvel in this fight.