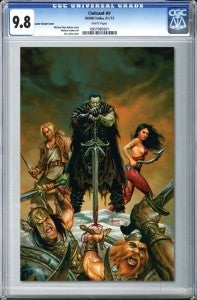 In what they're calling the "lowest print-run item from a mainstream Direct Market publisherand a legendary creator...ever!", Boom! Studios announced today that fan-favorite Conan artist Joe Jusko will do a retailer incentive variant cover for January's Outcast #2. The hitch? The issue in question will be stripped of all trade dress, including the title, publisher name and issue number, in order to better show off Jusko's popular brand of hyper-detailed and fully-painted artwork. Oh, yeah, and every single variant will ship pre-graded at 9.8 by CGC. Outcast, billed by Boom! as perfect for fans of Conan and Game of Thrones, tells the story of Valen Brand, a former great warrior brought back from the dead and fighting to reclaim his soul. Boom! didn't clarify exactly how many copies of the book a retailer has to order in order to qualify for the variant in their press release, but a story over at Comic Book Resources pegs the number at 200. That's only ten percent of the 2,000 copies your retailer had to order in order to get your face on the cover of Amazing Spider-Man #669. Less, even, than the 500 copies retailers had to order in order to have their store name featured on the cover of Amazing Spider-Man #666 a few months earlier. Still, Amazing Spider-Man is a massive mainstream success and a book that many retailers are already likely to order in quantity. Given the desirability and price of such a highly-graded book by CGC (not to mention a fantastic Joe Jusko cover), might Boom! be able to flood the market with copies of a smaller book in an attempt to qualify for an incentive they may be able to sell for a good chunk of the total cost? And if so, will all those extra copies floating around help to establish the series beyond just January? With Marvel announcing a variety of Venom-themed variants in January, and a quick Google search revealing at least one other variant for Outcast #2, one wonders how much the market can bear when it comes to variant covers. While unheard-of for most small publishers and not too widely used at DC (usually a small handful each month, on their best-selling titles, at most), it seems that Marvel has variants on almost every title it publishes some months, and the ever-escalating nature of these extravagant variants can only drive those numbers higher if they continue to sell.