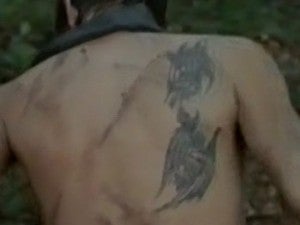 When Merle ripped Daryl's shirt off on The Walking Dead, it created mass confusion among many viewers. The purpose of the shirt rip was to show the scars on Daryl's back, which helped repair the bond between brothers as they realized they had both been abused. However, because Norman Reedus, who plays Daryl Dixon, has two rather large tattoos on his back, many viewers focused on those tattoos rather than the scars. Compounding the issue was the fact that the tattoos jumped from one side of Daryl's back in the initial scene to the other side of Daryl's back as he was walking away. Some viewers saw the tattoos moving as being an indication that the tattoos were fake and must have been painted on by makeup artists. However, the tattoos are actually real, because they are present in other photographs of Norman Reedus unrelated to The Walking Dead. The tattoos moving from one side of Daryl's back to the other had to be the image getting flipped post production. In interviews, Norman Reedus has often talked about his tattoos and has indicated they have nothing to do with Thee Walking Dead, so there is no special significance related to the show. His back tattoos are just some sort of angel/demon hybrid. In fact, there was so much confusion over Daryl's tattoos, that the question was addressed in the Talking Dead after show. Host Chris Hardwick said to Robert Kirkman, "I wanted to kind of clear this up, because I think a lot of people were confused by this a little bit. What did the tattoos mean on Daryl's back? It wasn't the tattoos you guys were focusing on, there were scars, because he was saying like 'oh, dad beat you up too.' And that's why Merle says 'you got out.'" Robert Kirkman answered, "Yeah, it's just another little piece of their childhood to peal back those layers and let you get to know Daryl a little bit more. And you know to kind of see a softer side of Merle and his reaction to that."

Dungeons & Dragons Wants to Make Miniatures With Your Face On It