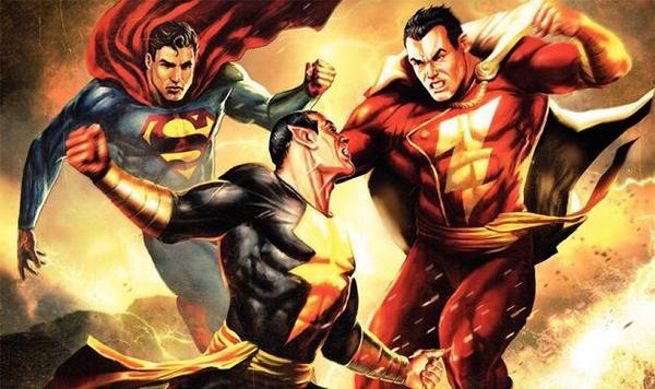 Dwayne "The Rock" Johnson recently revealed that he will be playing a DC Comics character in a movie, and he has just apparently narrowed it down to two possibilities. On Twitter, Johnson tweeted an image of Superman and Shazam fighting Black Adam.

Since Superman is already being played by Henry Cavill in the DC Comics Movie Universe, Johnson is evidently either playing Shazam or Black Adam. Along with the tweet, Johnson wrote, "Someone's gonna get it.."

In a recent interview with Total Film, Johnson said, "There's a character out there that we're going to announce very soon, that I'm going to play, and…I'll just say this, he has the power of Superman, and it's not Green Lantern, by the way. And believe me, John Stewart, he was a character I wanted to play, but there was already a version of Green Lantern, and so we've gone in a different direction. But this character has the power of Superman, he can throw down…just say the word. That's all I'm going say."

Of course, both Shazam and Black Adam would qualify as DC Comics character with the power of Superman.

According to a recent rumor by gossip blogger Nikki Finke, Warner Bros. is going to announce a Shazam movie at 2014 San Diego Comic-Con. The Shazam movie is rumored to have a release date set in July 2016.