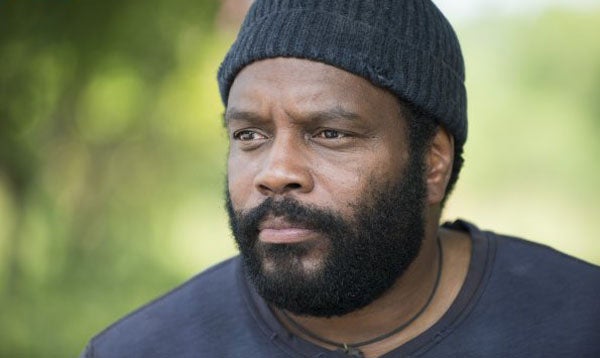 WARNING: The following interview discusses the events of The Walking Dead's fifth season midseason premiere, episode 5x09, "What Happened and What's Going On." Do NOT read any further if you haven't seen the episode and don't want to be spoiled.

On the midseason premiere episode of The Walking Dead, we had to say goodbye to one of our core characters- Tyreese. He fought for his life, but ultimately succumbed to the bite of a walker and loss of blood.

Chad L. Coleman, who plays Tyreese, agreed to an exclusive interview with The Walking Dead, discussing the events of the fifth season's ninth episode, and what's next for him.

So, it's all about episode nine. That fateful episode.

Yeah, it was a hell of an episode. I think it will go down as one of the best. I think I've got two of them in the top five, if you ask me. I think "The Grove," is top 3 and I think this one definitely gives me two in the top five.

Yeah, I thought this one was excellent. The method of story telling was completely unique, especially on The Walking Dead.

That's what I'm saying. They were very bold in the story telling, got some folks to come back. I think it's gonna really blow people's minds. I know some people aren't gonna be satisfied since I don't go out swinging the hammer. You know, that really is the comic book Tyreese. I couldn't have asked for him to go out a better way. He fought valiantly for his life and once your time on Earth is done it's just done. That's how I see it.

So, when you got the call or the script, was that it? You were just like, "Okay, that's it, time to go."

Well, I got a call. I got a call and Scott said he was seeing everybody, you know, "Come on in, I'm seeing everybody." So I was like, "Okay, okay!" So, when I got there I thought he was joking when he said it. Then he kind of teared up, I saw him tear up and I was like, "Oh, s—-, this is real," and I just kept saying, "Wow, wow, wow…" And you know, I just took a deep breathe and said, "How am I going out?" When he told me, I was just chomping at the bit ready for the episode.

Do you feel like it's a fair, complete ending for your character?

I do. That's why I wasn't as angry as some other folks. There isn't much else for me to do. They're not gonna go back and give me a love interest because they don't know if I'm healed from Karen, you know? And they're not gonna go down the road of the comic strip with Michonne and Carol and me. I'm not gonna be Rick's right-hand man because that's Daryl. So, the only thing I could see was them breaking me off into my own faction, but they weren't going to do that because I'm already a part of the central group and that dynamic kind of plays out through Carol a little bit. So, there was nothing else to do. And once I stood up to Rick there was no other place for me to go but out.

That's one way to look at it. I was too concerned, or shocked even more than sad, to see you go.

Yeah, we all are. That's real. That's real for sure. It's not easy. What I miss most is the incredible writing and the amazing actors and crew. But I'm down in Atlanta. I have a 19 month old down there. I'll pop in. I stay connected with the family, I always say, "TWD for life." I've got access, so HAH! I can come hang out.

Anyone in particular it was hard to say goodbye to?

For me, Rick… Andrew Lincoln is our fearless leader, truly and absolutely. Sonequa Martin-Greene who played my sister. Those two. It was hard to see Scott go, and hard to see David go, and obviously hard to see Beth go, and Bob. The one that I had an emotional, visceral reaction was when Scott got killed off and left the show. Andy and Melissa and Sonequa were special, like regular life stuff… Being able to talk to someone, for real.

What advice do you think Tyreese would give Sasha if he had a chance before he went out?

I think I did. I think I did that with her. I think what I said to her and she was like, "Mmm, that ain't me," just like my sister… Okay. We're still the same. Don't lose that part of yourself. That part of yourself that knows what right and wrong is regardless of the situation or circumstance- hold on to that. Because if you lose that, you know, you can get incredibly lost. You might do anything.

Tyreese definitely held on to that, even when everyone came back into that room with him. They tried to say you can't have a moral compass but he didn't give up.

Right, yeah. That's because it depends how you see it. If you see it as the end of the world then you might lose that, but think of it as the beginning of the world, then you know you've got a shot to do it better than you did before. That was my thing.

Do you think that's Tyreese's legacy? "Don't lose yourself, learn from the past."

Yeah, exactly. I'm a huge LOST fan, I have to quote John Locke here- "A leader can't lead until he knows where he's going."

That's right. So, that's why I think I would rather be a stable optimist.

So, what's next for you? You have The Expanse coming on Sy-Fy, what can you tell us about that?

I think it's gonna be an awesome outer-space deal. We don't have one. These guys, they wrote 5 best selling novels, Ty and Daniel. Leviathan, Wake. When people see me in this character they're gonna be like "Holy hell! How did he go from Tyreese to this guy?" It's like the Colin Powell of Outer Space.

Have you already started filming for The Expanse?

Yeah, we're shooting in Toronto now. We've got Thomas Jane. He plays the lead, he's kind of like the Rick of the show. We've got all these amazing supporting actors who aren't supporting actors just like The Walking Dead. I've got a crazy story line that's amazing. I reference Colin Powell for him and I used to reference Barack Obama for Tyreese, you know? If you look at it, long suffering, not quick to make decisions, doesn't want to beat his chest, doesn't want to just drive in and scare them all out. That's funny to end up making parallels to two of our prominent leaders.

It sounds like you're so in-the-head of Tyreese, still. Is it going to be tough saying goodbye to Tyreese if you haven't already?

Yeah, I don't think I'll ever say goodbye. I'll put him away in a sacred place. I put him in the same place I put Cutty. I just put him and Cutty in my favorite place. I'm really proud of playing those roles.

As you should be. Is there any chance we ever see you on The Walking Dead again?

Oh yeah, you know, there's gotta be. Just like we saw the convention of the Governor coming back. There's always that flashback possibility. Probably in some key moment, I hope back in my sister's life or something, you know. And then we go back and you see me without a beard. It would be some fun, you know, I'd be game for that the same way David Morrissey was.

So, there's a chance we see Tyreese on the show again, but he's definitely no longer among the living. Were you satisfied with Tyreese's death? Do you feel his story was complete?