Often, the most shocking and impactful deaths on a serialized TV series aren't the ones that are promoted to the hilt, but the ones where the fans are left saying, "...Wait, did they just kill him?!" Audiences got one of those on Sunday in the form of Brian Griffin, the dog from Family Guy, whose death represents a fundemental change to the show's structure since he was so key to so much of the series' humor. And while most fans don't believe he'll stay dead very long (it's Family Guy, after all, and there are already a few ways built into the story to bring him back), it was pretty shocking not just to watch a beloved character die on such a normally-lighthearted show, but to be sitting there for ten minutes expecting the time machien to pop back up and save him, and to just have the episode kind of...end. What were some of the more shocking TV deaths we've seen over the years? It certainly got us to thinking. Here were the ones we were even more taken aback by than Brian's. 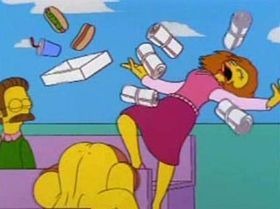 Maude Flanders (The Simpsons)The Simpsons is very much like Family Guy in that it's not a world where regular rules tend to apply. Horrific accidents can befall characters and they're up and walking around in the next scene if the story demands it. In this case, though, Maude fell to her death. It was just a few seconds before fans processed what had just happened--her accident wasn't treated with the kind of madcap, Looney Tunes energy that, say, many of Homer's have been over the years. Andrea (The Walking Dead) Possibly the most frustrating entry on the list, Andrea met her doom at the hands (teeth) of Milton, The Governor's longtime toady who had finally stood up to his old boss and earned himself a gunshot to the gut for his troubles. Turned out Milton had a plan of his own, though, and brought along a tool to help Andrea free herself from the barber's chair she'd been strapped to. 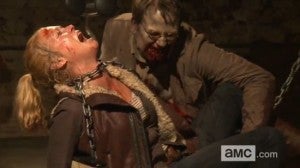 What followed was an agonizing process where audiences watched Andrea first fumble with the tool and then fight her way free--just seconds too late, as she was set upon by Milton, now a zombie. Many fans shook their fists at the perceived silliness of it all--she had, after all, stopped to talk to Milton and check on his "status" a number of times throughout the episode, and in a situation where seconds counted, the literally surrendered her life for the opportunity to sit there quietly, trying to determine whether he was dead or just passed out, rather than doing something about it. Those final seconds offered the audience such hope, though, as Andrea freed herself from the chair; it seemed as though she was going to make it--especially because her character in the comics is so important, and still alive. The punch in the gut moments later when it's revealed that she freed herself just a second too late...well, it was the high point of what was frankly an otherwise silly and underwhelming season finale. 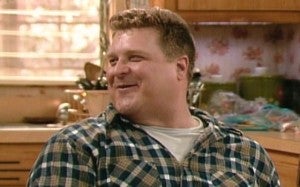 Dan Conner (Roseanne) Everybody wanted to get rid of the stupid "winning the lotto" story. Not many fans expected how that would go down, or that at the end of the day they might have preferred the series end with the blue-collar schlubs rich. When ComicBook.com spoke with her at San Diego Comic Con International this summer, Roseanne Barr said that she had John Goodman's Dan Conner killed in the final episode of Roseanne "for many good reasons. One: I never want to do a reunion show. Now, I wish I hadn't killed him because now I would do a reunion show…but I've already pissed them all off so they wouldn't do it." She joked about doing a reunion show using his ghost, or a zombie–or Ashton Kutcher. 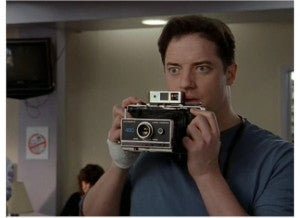 Ben Sullivan (Scrubs) Honorable mention here could go to Sam Dorian, but the fact that actor John Ritter had just passed away and everyone knew about it muted the impact of his death somewhat; eventually, it would have had to have been addressed, and they did it well. Ben Sullivan's death, on the other hand, was such a shocking episode to watch that it still brings a knot to my chest and tears to my eyes watching it--and it's been ten years since I first saw it. A former cancer sufferer whose disease had gone into remission, Ben was the brother of a recurring character and the best friend of a series regular. He was also the hugely likable and bankable Brendan Fraser, arguably the best piece of stunt casting the series managed in its nearly a decade on the air. Ben went in for a routine checkup on the same day another, very sick patient came in, seemingly about to die. When word of Ben's passing reached the characters, though, names were removed and the audience was left to assume that it was the sick patient who died rather than Ben. For the rest of the episode, "Ben"--later revealed as a hallucination--tried to convince Perry Cox to go easy on those around him, whom he blamed for what he thought was an avoidable death. The dueling narrative of Cox's infant son having a birthday party meant that ignoring his wife's phone calls and promising to "be there on Saturday" didn't set off any alarms--until Perry arrived at Ben's funeral, and the camera pulled back to reveal to the audience just what had been building all episode. Orion (Chuck) Chuck was, in general, a light and fun show. It had high stakes, but for the most part it never really felt like those stakes were going to come home to roost, so to speak. The violence was all very cartoony and the characters always had a clever way to sneak themselves out of trouble. So it was pretty sad, and shocking, when Chuck's father actually died, so soon after being reunited with his children after all those years apart. 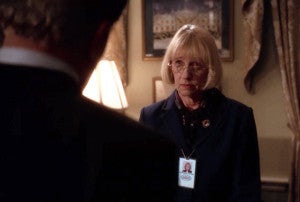 Mrs. Landingham (The West Wing) This one, you could kind of see coming--but it didn't matter; it was still heartbreaking. Having finally, at age 70 or so, bought her first new car, the President's secretary--a woman he'd spent most of his life with after having met her in high school--was killed when another motorist ran a red light and T-boned her. She didn't even make it back to the White House for President Bartlet to see the car first. It gave him one of the first really profound moments of introspection he had in the series and the spirit of Mrs. Landingham helped to guide him through some rough seas ahead. Of course, S.H.I.E.L.D. Agents Flynn and Coulson were both regular fixtures in the Bartlet White House. Can you say "Life Model Decoy?" Lt. Col. Henry Blake (M*A*S*H) In a twist on "he only had one more day 'til retirement" trope you tend to see in cop movies, Henry Blake's transport plane was blown out of the sky--while on his way home from Korea after serving for years with the 4077. Omar Little (The Wire) A fan favorite character and arguably the most decent person on a series that helped to shape our current generation of demented TV antiheroes, Omar was shot, seemingly arbitrarily, by a young boy. He never saw it coming, and most viewers didn't, either.

Dee Dualla (Battlestar Galactica) The quiet desperation of Dualla's suicide made it shocking--she seemed...fine...just in that moment, right up until she put a gun to her own head. Typically, when something like this happens (and it's rare for TV series to deal with suicide anyway, let alone of a character who's actually familiar to the viewers), it's dealt with in a Very Special Episode kind of context that you can see coming a bit (think Kal Penn's character from House). Not so, here. Sayid, Sun and Jin (Lost) These three, we're counting as one because they all happened in rapid succession. It's rare that you get that kind of attrition from members of the main cast, and in the only other case I can think of (Game of Thrones's "red wedding"), it wouldn't be a surprise if you actually, you know, read the damned books. Lost wasn't based on a book, though, so it was pretty easy to be blindsided by this one.