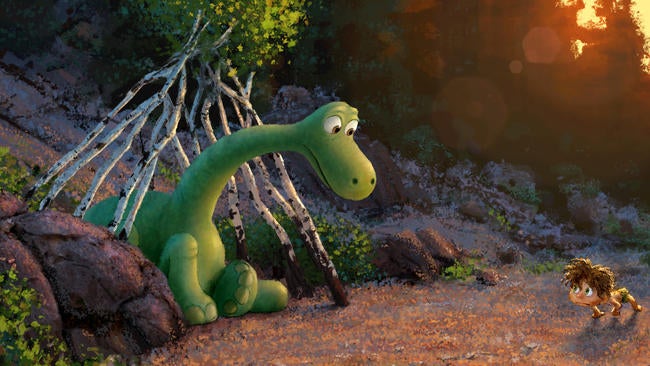 Pixar has released their first look of The Good Dinosaur, showing the titular dinosaur meeting his cave boy companion.

This is the first major look at Pixar's challenged film, which won't arrive in theaters until 18 months after its original premiere. In an interview with The Los Angeles Times, new director Peter Sohn discussed how he has been streamlining the delayed film, but is keeping "the heart of the story" intact. The Good Dinosaur was supposed to premiere this May with director Bob Peterson, but Pixar fired the director last summer over creative differences. The move caused Pixar to endure a year without a feature release, bumping their entire slate of planned films back by more than a year. But according to the Reporter, Pixar is much more pleased with Sohn's product.

The Good Dinosaur follows the story of a Arlo, a friendly Apatosaurus who befriends a young cave boy. Neil Patrick Harris, Bill Hader, John Lithgow, and Lucas Neff round out the film's cast. The Good Dinosaur will now hit theaters on November 25, 2015.